Nu gijzelen staten met minder inwoners dan Utrecht de VS. Heb je dat al eens beseft?
"The enemy isn't men, or women, it's bloody stupid people and no one has the right to be stupid." - Sir Terry Pratchett.
“The Grand Canyon is a minor crevice compared to the vast chasm of ignorance of that man,” - Salmond about Donald Trump
vrijdag 22 mei 2020 @ 23:37:11 #253

quote:
The Trump administration withdrew one of the largest contracts in its signature effort to use farm surplus to feed hungry Americans, capping a chaotic process that industry experts say relied too heavily on companies with little demonstrated experience in farming, food chains or food banks.

Contracts totaling more than $107 million went to a San Antonio event planner, an avocado mail-order company, a health-and-wellness airport kiosk company and a trade finance corporation, according to the Agriculture Department’s announcement of contract awards.

Echt amerikanen wonen niet in steden! Of zo?
"The enemy isn't men, or women, it's bloody stupid people and no one has the right to be stupid." - Sir Terry Pratchett.
“The Grand Canyon is a minor crevice compared to the vast chasm of ignorance of that man,” - Salmond about Donald Trump
vrijdag 22 mei 2020 @ 23:47:13 #258

“Holy shit. McEnany takes a Q from ultra-sycophantic OAN about whether Trump has considering pardoning Obama "for illegally wiretapping" him. (That didn't happen.) McEnany uses it as an opportunity to attack the press for not covering Obamagate & then abruptly ends the briefing”.
https://mobile.twitter.com/atrupar/status/1263901117894651906
Zie het filmpje in tweet.
N.B. the presssecr. was prepared to answer and had 3 slides ready to present! 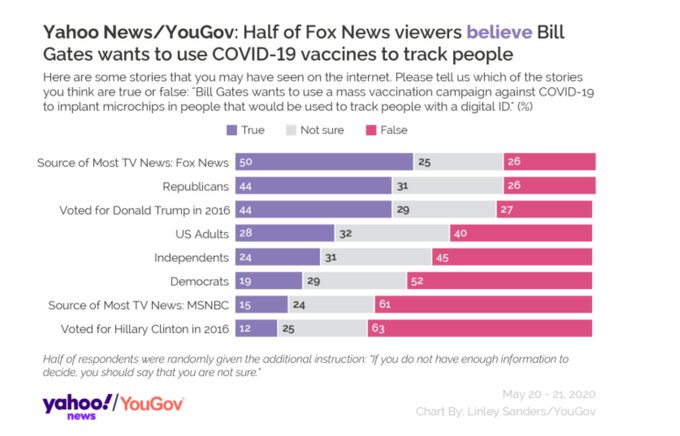 “ SCOOP: In a meeting last week, the Trump administration discussed conducting the first U.S. nuclear test explosion since 1992 in a move that would have far-reaching consequences and reverse a decades-long moratorium. 1/”

Comment oa.: “ Jackie Kennedy, after the Cuban Missile Crisis, said that what worried President Kennedy the most was that a war might be started – not by big men with self-control and restraint, but by little men – the ones moved by fear and pride.” 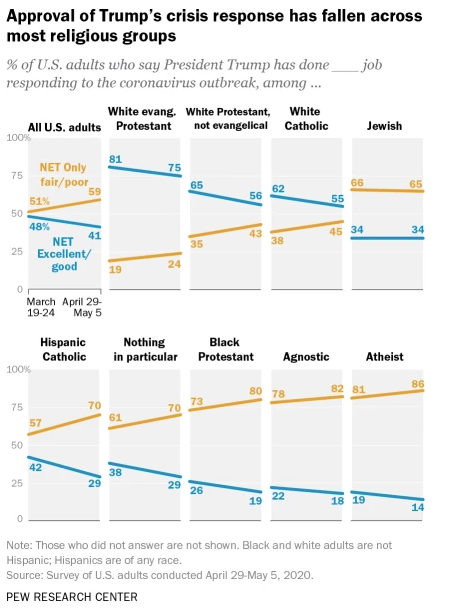 quote:
However, for the first three years of his Presidency and into the early weeks of the COVID crisis, white evangelical Christians remained solidly behind the President — until now. As Pew Research writes, “White evangelical Protestants are President Donald Trump’s most supportive religious constituency, but they are slightly less positive about his response to the coronavirus pandemic now than they were in March, according to a new Pew Research Center Survey. The decline comes as recommendations for social distancing in the United States stretch into a third month and Americans overall express waning confidence in how the president and public health officials are handling the crisis.”

“The fundamental cause of the trouble in the modern world today is that the stupid are cocksure while the intelligent are full of doubt.”— Bertrand Russell
zaterdag 23 mei 2020 @ 05:14:41 #273

“ Kayleigh McEnany announced today that Trump was donating part of his presidential salary to HHS. She displayed one of his checks during the announcement. 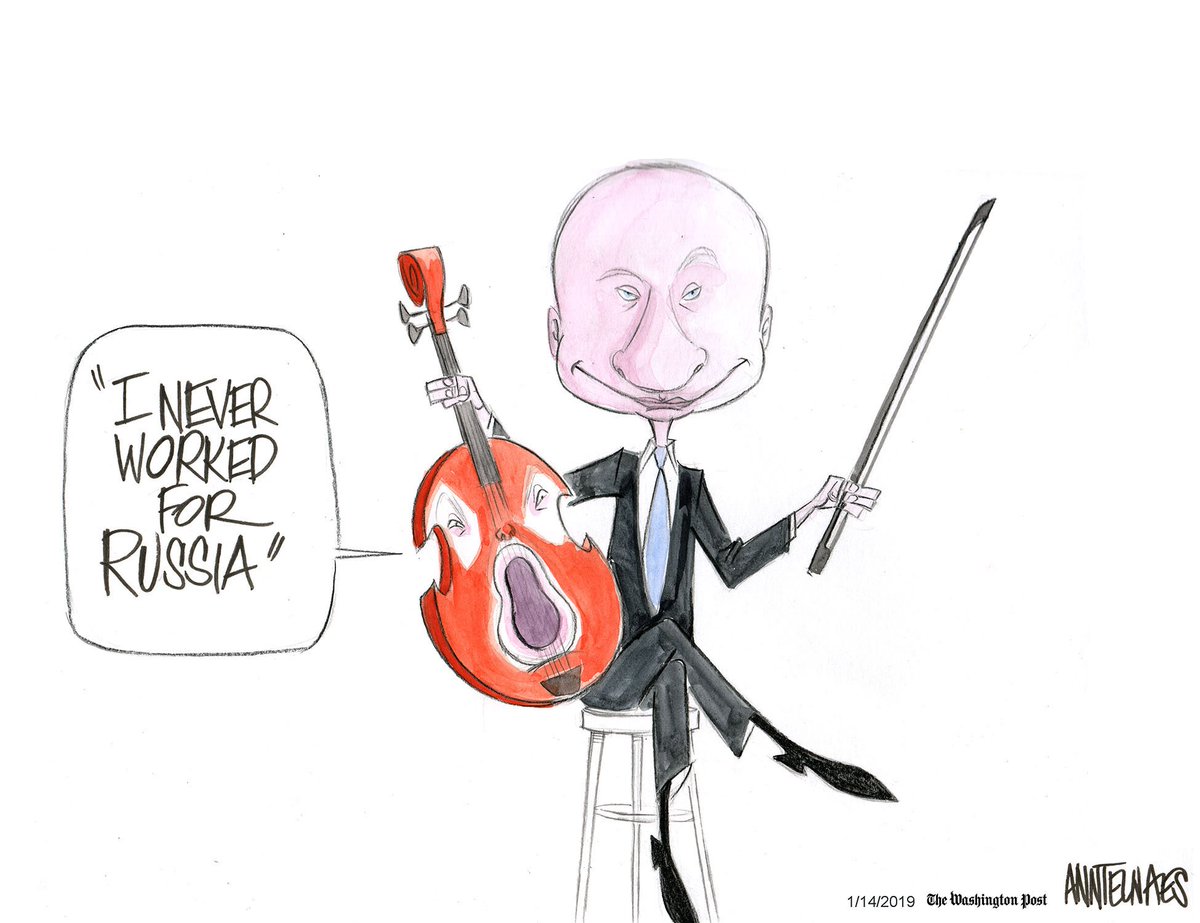 “The fundamental cause of the trouble in the modern world today is that the stupid are cocksure while the intelligent are full of doubt.”— Bertrand Russell
zaterdag 23 mei 2020 @ 08:22:55 #277

Vice President Biden spent his career fighting alongside and for the African American community. He won his party's nomination by earning every vote and meeting people where they are and that's exactly what he intends to do this November. 1/ reageer retweet

The comments made at the end of the Breakfast Club interview were in jest, but let’s be clear about what the VP was saying: he was making the distinction that he would put his record with the African American community up against Trump’s any day. Period. reageer retweet

Ok, who did this?

Je verspreid er anders genoeg hier.
"The enemy isn't men, or women, it's bloody stupid people and no one has the right to be stupid." - Sir Terry Pratchett.
“The Grand Canyon is a minor crevice compared to the vast chasm of ignorance of that man,” - Salmond about Donald Trump
zaterdag 23 mei 2020 @ 15:31:45 #299

quote:
WASHINGTON—President Trump is considering establishing a panel to review complaints of anticonservative bias on social media, according to people familiar with the matter, in a move that would likely draw pushback from technology companies and others.

The plans are still under discussion but could include the establishment of a White House-created commission that would examine allegations of online bias and censorship, these people said. The administration could also encourage similar reviews by federal regulatory agencies, such as the Federal Communications Commission and the Federal Election Commission, they said.

“Left-wing bias in the tech world is a concern that definitely needs to be addressed from our vantage point, and at least exposed [so] that Americans have clear eyes about what we’re dealing with,” a White House official said.

Mr. Trump has long expressed that viewpoint, and in a recent Twitter post indicated that a plan to address complaints of bias is in the works.

“The Radical Left is in total command & control of Facebook, Instagram, Twitter and Google,” Mr. Trump tweeted May 16, adding that his administration is “working to remedy this illegal situation.”

Facebook Inc., which also owns Instagram, defended its practices when asked for a response to the nascent proposal.

“People on both sides of the aisle disagree with some of the positions we’ve taken, but we remain committed to seeking outside perspectives and communicating clearly about why we make the decisions we do,” the company said.

Twitter Inc. said: “We enforce the Twitter Rules impartially for all users, regardless of their background or political affiliation. We are constantly working to improve our systems and will continue to be transparent and in regular communication with elected officials in regard to our efforts.”

“Online platforms do not have a political bias, and offer more people a chance to have their voice heard than at any point in history,” he said.

The American Civil Liberties Union’s senior legislative counsel Kate Ruane said any moves by the government carry significant risk of misfiring because of the companies’ free-speech rights and other concerns.

While it couldn’t be determined exactly what the administration might do, “we do know for certain that when the government tries to intervene in viewpoint-based content moderation decisions by private companies, what typically follows are debacles that undermine online privacy, safety and speech,” she said.

The administration also is considering new recommendations for revamping federal protections adopted by Congress in Section 230 of the 1996 Communications Decency Act, which gives online companies broad immunity from liability for their users’ actions, as well as wide latitude to police content.

Critics across the political spectrum have argued that Section 230 now affords too much power to the giant tech platforms.

Conservative groups in particular contend that big tech platforms engage in viewpoint bias in search rankings, news feeds, content moderation and other practices. The companies generally deny that they allow political biases to influence their decisions, although they sometimes have fine-tuned their methods in response to specific criticisms.

The administration’s moves—if they happen—would help highlight a complaint that Mr. Trump has raised frequently during his presidency, just as the 2020 campaign season begins.

Mr. Trump last summer convened a White House social-media summit where conservative critics vented about supposed big-tech bias. At the time, the administration also considered a range of possible actions, including taking steps to put the FCC and another regulatory agency, the Federal Trade Commission, in charge of policing internet censorship. But those proposals drew criticism from civil-liberties advocates and eventually stalled.

Two GOP lawmakers who are allies of Mr. Trump said the administration is moving closer to acting now as the 2020 election looms.

“The president is increasingly aware of the headwinds we face from big-tech bias,” said Rep. Matt Gaetz (R., Fla.). “There have been very active discussions about what the administration can do with executive action to create a fair marketplace of ideas,” he said.

Mr. Gaetz noted that White House chief of staff Mark Meadows, a former North Carolina House member and a leading conservative voice, was himself subject to a practice on Twitter known as “shadow banning” in 2018 that made his account difficult to find even when a user was searching specifically for him.

“When Twitter shadow banned Mark Meadows, I’m not sure they counted on him becoming chief of staff,” said Mr. Gaetz, whose own account also was subject to the restriction.

Twitter said at the time that conservative public officials weren’t being targeted based on their views, but because of how their accounts interacted with others that had violated Twitter’s rules. Twitter said it was making changes to its policy.

Mr. Trump is likely to use the online review panel to help energize his base in a year when online campaigning could take on added significance because of the coronavirus pandemic.

“What they [White House officials] would like to see is bringing awareness to this being an issue,” said Sen. Marsha Blackburn (R., Tenn.), who is generally aware of the discussions.

Consideration of the new steps comes at a time of rising tension between the administration and Silicon Valley. The Justice Department has been gearing up to sue Google over alleged antitrust violations as soon as this summer, people familiar with the matter said recently.

Google said at the time that it continues to engage with the investigation, adding that “our focus is firmly on providing services that help consumers, support thousands of businesses and enable increased choice and competition.”