Nog even en we hebben het ook over underspeed

quote:
This Formula 1 season just keeps on delivering, after Max Verstappen took a brilliant victory in a French Grand Prix that left Lewis Hamilton and Mercedes ruing a costly error.

Did Mercedes lose the race or Verstappen tear it from their grasp? In truth, it was a bit of both, as a see-saw sequence of events flipped the advantage back and forth between the two title rivals at Paul Ricard.

Verstappen started the race in front, but handed the lead to Hamilton with a mistake at the first corner. Mercedes gave it back to him with a pit-stop strategy error, on which Verstappen capitalised with two brilliant laps around the pit stop.

Once in the lead, Red Bull chose to surrender it with what team principal Christian Horner described as a "ballsy call" and ask Verstappen to recover 18 seconds in 20 laps. He passed Hamilton with a lap and a half to go to take a win that underlines yet again the seriousness of the threat Mercedes face from a resurgent Red Bull this year, and moves the Dutchman into a 12-point championship lead.

"This is a tough one this year," Mercedes team boss Toto Wolff said afterwards.

With Hamilton leading in the first stint, the race was in Mercedes' hands, and as the first pit stops approached, they felt they were very much in control.

They pitted Hamilton's team-mate Valtteri Bottas from third place on lap 17. This forced Red Bull to respond with Verstappen the next time around. The obvious thing was for Mercedes to stop Hamilton on lap 18, too. Had they done so, he would have maintained the race lead and probably never lost it.

But, with a 3.1-second lead over Verstappen, they felt safe to leave Hamilton out for one extra lap.

In theory, that was too big an advantage for the Dutchman to overturn with the so-called undercut - stopping a lap early and benefiting from a lap's worth of fresh-tyre grip.

But the theory was wrong - and Verstappen made it so.

Immediately after the race, Mercedes were still not sure how Verstappen had managed to take the lead, sweeping past Hamilton into Turn One as the world champion emerged from the pits. After all, Bottas had gained only 1.2secs on Verstappen with his one-lap-earlier stop. Somehow, Verstappen made nearly three times that on Hamilton.

Verstappen's in-lap accounted for some of that - just under 0.6secs faster than Hamilton's. The time Verstappen spent in the pit lane was about 0.6secs less than the Mercedes driver. And on what Horner described as a "stonking" out lap, Verstappen gained 1.6secs relative to Hamilton.

"My out lap was good," Verstappen said, "but I didn't expect the undercut to be so big. But when I went out I had suddenly so much more grip on the tyres everywhere. We never expected to undercut Lewis. With the tricky conditions on used tyres, it is easy to lose the car a little bit. Whereas on new tyres you have one lap when the tyres feel so much better."

Hamilton was perplexed."I don't know [how it happened]," he said. "Great pit stop. Have to go back and look at it. I was definitely down on my in-lap, my tyres were getting worse." 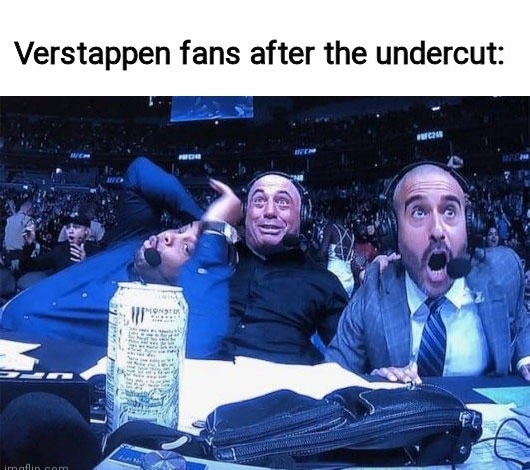