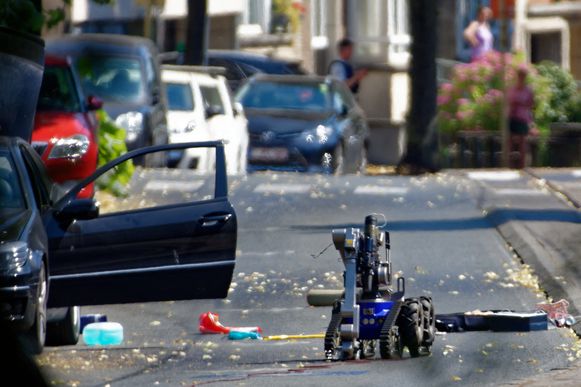 PARIS (Reuters) - An Iranian diplomat charged in Belgium with planning to bomb a meeting of an exiled Iranian opposition group in France warned authorities of possible retaliation by unidentified groups if he is found guilty, according to a police document.

Belgian prosecutors charged Vienna-based Assadolah Assadi in Oct. 2018 and three others with planning an attack that year on a rally of the Paris-based National Council of Resistance of Iran (NCRI) attended by high profile former U.S., European and Arab officials.

Assadi, who goes on trial on Nov. 27, was the third counsellor at Iran's embassy in Vienna. French officials have said he was in charge of intelligence in southern Europe and was acting on orders from Tehran.

He is one of the first Iranian diplomats to face trial on terrorism charges in the European Union.

Tehran has repeatedly dismissed the charges against Assadi, calling them a "false flag" operation by the NCRI's political arm, the MEK, (Mujaheedin-e Khalq), which presents itself as an alternative to Iran's theocracy. Assadi has not commented on the charges and his lawyer has declined to comment on them.

Minutes of a March 12 meeting between Assadi and Belgian police, seen by Reuters and confirmed as authentic by his lawyer, show the diplomat initially set out Tehran's long-standing grievances with the MEK's activities in the past.

He then warned Belgian authorities that his case was being closely watched by undisclosed groups in Iran and neighbouring countries.

"According to ASSADI Assadolah we (Belgium) do not realize what is going to happen, in the event of an unfavourable verdict," the minutes, taken by the Belgian police, say.

Assadi told police that armed groups in Iraq, Lebanon, Yemen and Syria, as well as in Iran, were interested in the outcome of his case and would be "watching from the sidelines to see if Belgium would support them or not", according to the minutes.

He declined to answer when asked by police if any kind of organization was involved.

Asked about Assadi's comments, a spokesman for the Belgian federal prosecutor said: "Such threats can occur, but we always take the necessary security measures." The spokesman declined to comment further or say whether intelligence services had been informed of Assadi's statement.

Assadi said he was making the statement at his own behest and had not discussed it beforehand with the Iranian embassy, according to the record of his 31-minute encounter with police. The embassy could not immediately be reached for comment.

"It is absolutely not a threat of retaliation and if it's understood that way it's a misinterpretation," he told Reuters. "He will explain the sense of his remarks to the court."

Tehran accuses European states of harbouring the MEK, which it deems a terrorist organisation. The group had been based in the Iraqi capital Baghdad under former president Saddam Hussein and was on the U.S. State Department's terror list from 1997 to 2012 when it was taken off it renounced violence.

A co-ordinated intelligence operation between French, German and Belgian services thwarted the planned attack in the days prior to the NCRI rally, in which the keynote speech was given by U.S. President Donald Trump’s lawyer Rudy Giuliani.

Assadi was arrested while on holiday in Germany and handed over to Belgium, where two of his suspected accomplices had been arrested with 500 grams (one lb) of TATP, an explosive, as well as a detonation device.

France said Iran's intelligence ministry was behind the plot and expelled an Iranian diplomat, while the European Union froze the assets of an Iranian intelligence unit and two of its staff.

Blaffende honden bijten niet
Live the questions now. Perhaps you will then gradually, without noticing it, some distant day live right into the answer
woensdag 14 oktober 2020 @ 00:24:28 #7

Live the questions now. Perhaps you will then gradually, without noticing it, some distant day live right into the answer
woensdag 14 oktober 2020 @ 00:59:22 #15

Iran is een islamitische staat en derhalve een weerzinwekkende natie, dat is duidelijk.
Why you should never talk to the police
woensdag 14 oktober 2020 @ 12:17:24 #39