Extra informatie over de coronacrisis in de VS:

See Which States Are Reopening and Which Are Still Shut Down
Handige lijst met de maatregelen per staat.

It’s Pox-Eclipse, full of pain! And out of it were birthed crackling dust and fearsome time. It were full-on winter, and Mr. Dead chasing them all. But one he couldn’t catch, that were Captain Walker.
maandag 10 augustus 2020 @ 20:25:10 #2 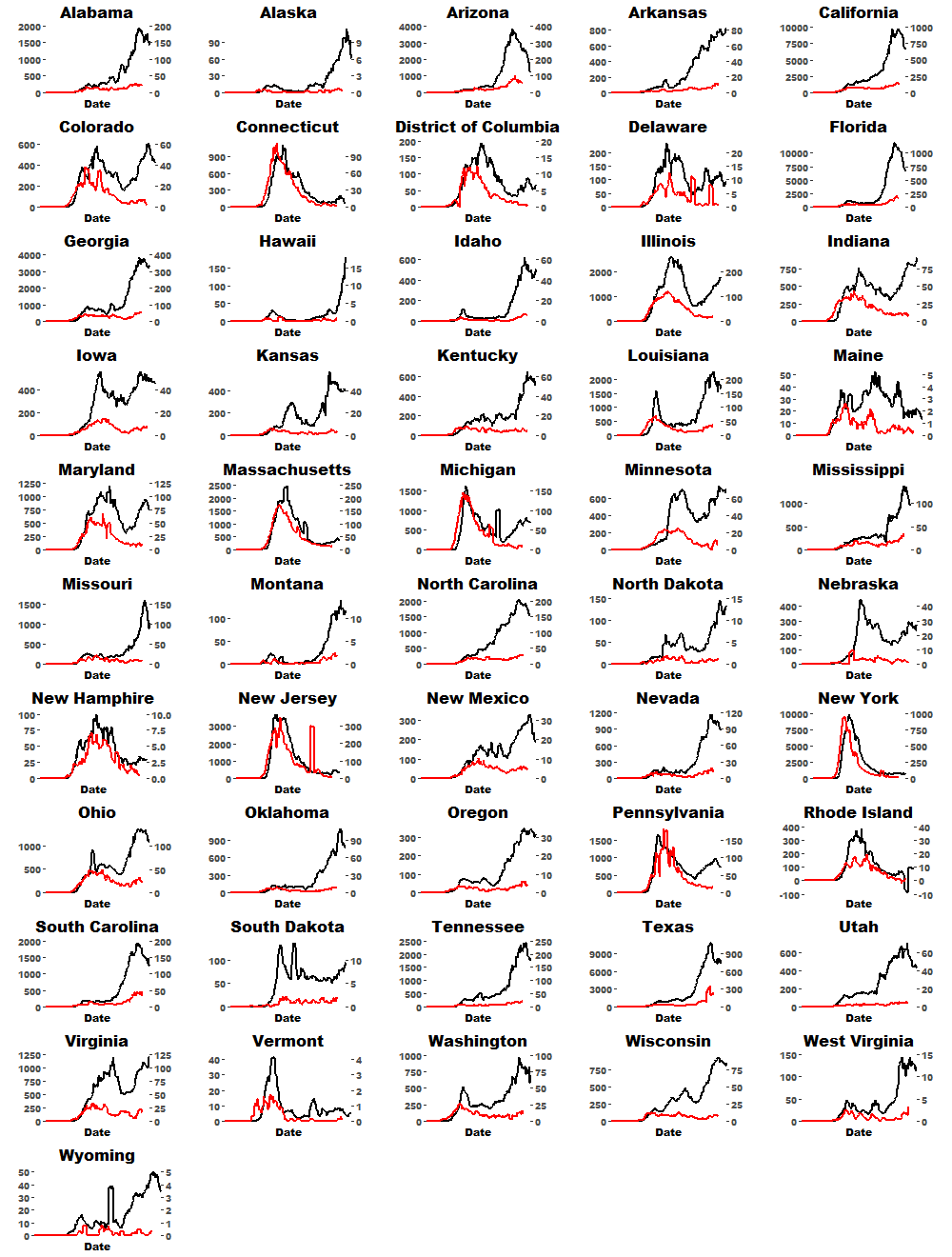 Cruz Santos thought her life was finally turning around in early March when she found a job at a shoe store after months of looking.

Two weeks later, the store shut down, throwing her back onto the unemployment lines, and leaving her and her three school-age kids at risk of losing the one-bedroom Bronx apartment where they live.

"I don't know what's going to happen and if they're going to kick me out of my apartment. And that's something hard, you know. You can hardly even sleep sometimes," Santos says.

Over the weekend, President Trump signed an executive order requiring administration officials to "take all lawful measures to prevent residential evictions and foreclosures resulting from financial hardships caused by COVID-19."

He also ordered cabinet officials to identify funds that could be used to aid distressed renters.

But Trump's order neither bans evictions outright nor provides rental assistance — actions that need to be approved by Congress — and most housing activists say it will do little to stop the tidal wave of evictions that's coming.

After the pandemic struck, Congress and many state governments imposed bans on evictions meant to protect the legions of suddenly unemployed workers from losing their homes.

Now, those bans are lapsing in most states, just as the supplemental unemployment benefits signed into law by Trump in March are also ending, and Congress has been unable to reach agreement on a bill that would extend them.

"Now you're in a moment where you still haven't gone back to work, most government benefits have stopped, and the rent is still due," says the Aspen Institute's Zach Neumann, who founded the COVID-19 Eviction Defense Project.

Neumann estimates that of the 110 million Americans who live in rental housing, at least 30 million are at risk of eviction by the end of September.

"There's tremendous urgency," adds Diane Yentel, president and CEO of the National Low Income Housing Coalition. "There are millions of renters who can't sleep at night because they don't know what they're going to do if they become homeless."

Kristie McDonald went on disability after surgery last year. By the time she was healthy enough to go back to work, the coronavirus had struck, making it all but impossible to find a job.

The $600-a-week unemployment benefit provided by the federal government allowed her to pay the rent on her apartment in Biddeford, Maine. Now that's gone and she's not sure what she'll do.

"It's not an immediate concern. Like, I have enough money that I know I can pay rent next month. But after that it starts to become very precarious," McDonald says.

Even when bans are still in place, tenants can have trouble understanding whether they're protected or what their rights are.

In Florida, a temporary ban has been extended. Still, the extension merely allows renters who can prove they've been hurt by COVID-19 to appeal for more time to pay what they owe, says Jamos Mobley, an attorney in Orlando, where a small army of hospitality and tourism workers is out of work.

"A lot of folks hear that we've had an extension, and they're going to assume they're protected. And that's just not the case. Evictions are moving forward. They're being filed. They're being served," says Mobley, who works for the Legal Aid Society in Central Florida.

"I think our next pandemic, if nothing is done, is going to be a homeless pandemic," he says.

The coming surge in evictions is a health problem, as well as an economic one, Yentel says.

"When our collective health depends on our ability to stay home, we all have a stake in ensuring that millions of people don't lose theirs, in the middle of this pandemic," she says.
[i]"“The man who never alters his opinion is like standing water, and breeds reptiles of the mind.”[/i] - William Blake, The Marriage of Heaven and Hell.
dinsdag 11 augustus 2020 @ 13:24:40 #8

Idaho Lawmaker: "Listening To Experts Is An Elitist Approach" To Coronavirus Restrictions

A group of Idaho lawmakers is pushing a bill that would strip the power of public health districts to close schools during an emergency or mandate masks to prevent the spread of disease.

Members of the Education Working Group Monday overwhelmingly voted for the proposal. Many lawmakers said local school board members should be making these decisions, as opposed to public health district board members.


“Listening to experts to set policy is an elitist approach and I’m very fearful of an elitist approach,” he said. “I’m also fearful that it leads to totalitarianism, especially when you say, ‘Well. We’re doing it for the public good.’”

Je zult maar in Idaho (moeten) wonen of er familie hebben wonen. @George_of_the_Jungle
[i]"“The man who never alters his opinion is like standing water, and breeds reptiles of the mind.”[/i] - William Blake, The Marriage of Heaven and Hell.
dinsdag 11 augustus 2020 @ 15:27:25 #10

Idaho Lawmaker: "Listening To Experts Is An Elitist Approach" To Coronavirus Restrictions

A group of Idaho lawmakers is pushing a bill that would strip the power of public health districts to close schools during an emergency or mandate masks to prevent the spread of disease.

Members of the Education Working Group Monday overwhelmingly voted for the proposal. Many lawmakers said local school board members should be making these decisions, as opposed to public health district board members.


“Listening to experts to set policy is an elitist approach and I’m very fearful of an elitist approach,” he said. “I’m also fearful that it leads to totalitarianism, especially when you say, ‘Well. We’re doing it for the public good.’”

Corona in de VS graag

That statistic could add thousands to the state’s official care home death toll of just over 6,600. But so far the administration of Democratic Gov. Andrew Cuomo has refused to divulge the number, leading to speculation the state is manipulating the figures to make it appear it is doing better than other states and to make a tragic situation less dire.

How big a difference could it make? Since May, federal regulators have required nursing homes to submit data on coronavirus deaths each week, whether or not residents died in the facility or at a hospital. Because the requirement came after the height of New York’s outbreak, the available data is relatively small. According to the federal data, roughly a fifth of the state’s homes reported resident deaths from early June to mid July — a tally of 323 dead, 65 percent higher than the state’s count of 195 during that time period.

Even if half that undercount had held true from the start of the pandemic, that would translate into thousands more nursing home resident deaths than the state has acknowledged.

Another group of numbers also suggests an undercount. State health department surveys show 21,000 nursing home beds are lying empty this year, 13,000 more than expected — an increase of almost double the official state nursing home death tally. While some of that increase can be attributed to fewer new admissions and people pulling their loved ones out, it suggests that many others who aren’t there anymore died.

However flawed New York’s count, Cuomo has not been shy about comparing it to tallies in other states.

Nearly every time Cuomo is questioned about New York’s nursing home death toll, he brushes off criticism as politically motivated and notes that his state’s percentage of nursing home deaths out of its overall COVID-19 death toll is around 20%, far less than Pennsylvania’s 68%, Massachusetts’ 64% and New Jersey’s 44%.

“Look at the basic facts where New York is versus other states,” Cuomo said during a briefing Monday. “You look at where New York is as a percentage of nursing home deaths, it’s all the way at the bottom of the list.”

In another briefing last month, he touted New York’s percentage ranking as 35th in the nation. “Go talk to 34 other states first. Go talk to the Republican states now — Florida, Texas, Arizona — ask them what is happening in nursing homes. It’s all politics.”

Boston University geriatrics expert Thomas Perls said it doesn’t make sense that nursing home resident deaths as a percentage of total deaths in many nearby states are more than triple what was reported in New York.

A Cuomo spokesman did not respond to repeated requests for comment. New York’s Department of Health said in a statement that it has been a leader in providing facility-specific information on nursing home deaths and “no one has been clearer in personalizing the human cost of the pandemic.”

A running tally by The Associated Press shows that more than 68,600 residents and staff at nursing homes and long-term facilities across the nation have died from the coronarivus, out of more than 164,000 overall deaths.

For all 43 states that break out nursing home data, resident deaths make up 44% of total COVID deaths in their states, according to data from the Kaiser Family Foundation. Assuming the same proportion held in New York, that would translate to more than 11,000 nursing home deaths.

To be sure, comparing coronavirus deaths in nursing homes across states can be difficult because of the differences in how states conduct their counts. New York is among several states that include probable COVID-19 deaths as well as those confirmed by a test. Some states don’t count deaths from homes where fewer than five have died. Others don’t always give precise numbers, providing ranges instead. And all ultimately rely on the nursing homes themselves to provide the raw data.

A controversial March 25 order to send recovering COVID-19 patients from hospitals into nursing homes that was designed to free up hospital bed space at the height of the pandemic has drawn withering criticism from relatives and patient advocates who contend it accelerated nursing home outbreaks.

Cuomo reversed the order under pressure in early May. And his health department later released an internal report that concluded asymptomatic nursing home staffers were the real spreaders of the virus, not the 6,300 recovering patients released from hospitals into nursing homes.

But epidemiologists and academics derided the study for a flawed methodology that sidestepped key questions and relied on selective stats, including the state’s official death toll figures.

Nursing homes alone account for more than 382,000 cases and more than 64,000 deaths in the United States, according to a New York Times database.

quote:
Coronavirus may spread much farther than 6 feet in indoor spaces with poor ventilation

Analyzing air samples in a hospital room, Lednicky's team found infectious virus can spread through the air — up to 16 feet away from an infected patient — through tiny droplets called aerosols.

Nursing homes alone account for more than 382,000 cases and more than 64,000 deaths in the United States, according to a New York Times database. 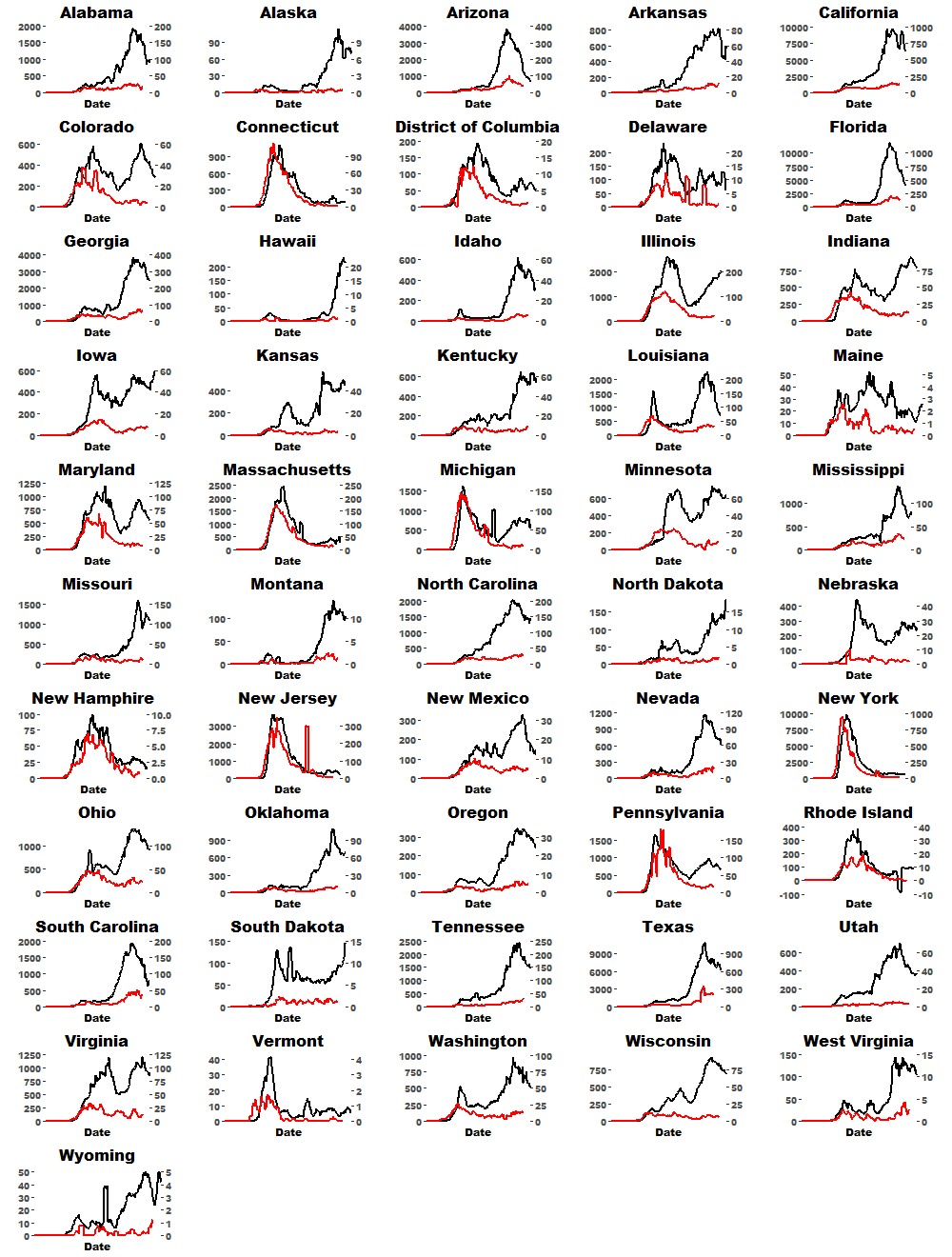