BLM demonstraties in de VS #36

The Times has reconstructed the death of George Floyd on May 25. Security footage, witness videos and official documents show how a series of actions by officers turned fatal.

On May 25, Minneapolis police officers arrested George Floyd, a 46-year-old black man, after a convenience store employee called 911 and told the police that Mr. Floyd had bought cigarettes with a counterfeit $20 bill. Seventeen minutes after the first squad car arrived at the scene, Mr. Floyd was unconscious and pinned beneath three police officers, showing no signs of life.

The nationwide anti-police brutality protests sparked by the killing of George Floyd in the US have been marked by widespread incidents of police violence, including punching, kicking, gassing, pepper-spraying and driving vehicles at often peaceful protesters in states across the country.

The actions have left thousands of protesters in jail and injured many others, leaving some with life-threatening injuries. 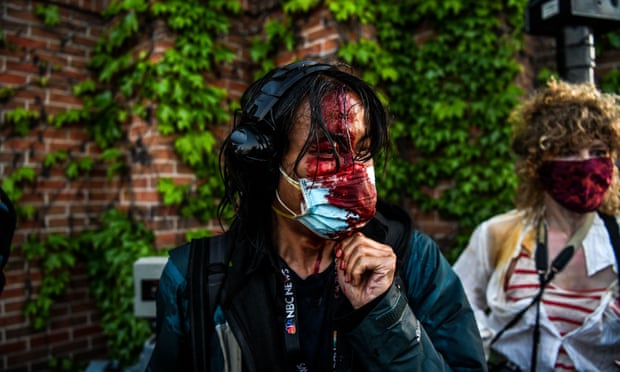 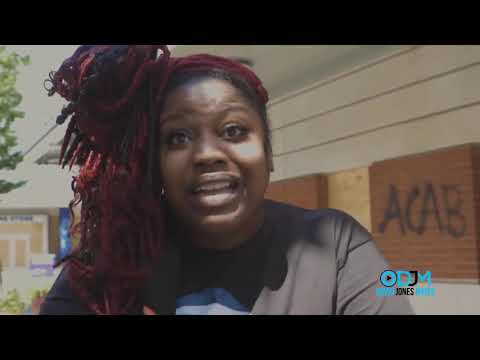 Institutional racism (also known as systemic racism) is a form of racism expressed in the practice of social and political institutions. It is reflected in disparities regarding wealth, income, criminal justice, employment, housing, health care, political power and education, among other factors.

A Harvard graduate who claims she was fired from her 'dream job' at Deloitte after saying she'd 'stab' anyone who told her 'all lives matter' in a TikTok video was never actually employed by the firm, it has emerged.

Claira Janover, 22, tearfully claimed on Wednesday that supporters of Donald Trump 'took my job away from me' by calling for her firing, in response to the video.

In the clip, which has sharply divided people online, she threatens to 'stab' anyone who says 'all lives matter'.

Deloitte, however, have confirmed that she was never an employee of the company.

Instead she was scheduled to complete an internship with them later this summer, which the company rescinded.

Jonathan Gandal, a managing director at the firm, said Janover 'has never been an employee of our organization'.

He said she was instead 'formerly scheduled for a two-week internship later this summer.'

Gandal said the offer of an internship was withdrawn because they have a company policy forbidding threatening violence.

'Deloitte unequivocally stands against the legacy of systemic bias, racism, and unequal treatment that continues to plague our communities,' he said.

'We encourage and support our colleagues to speak out on these issues of critical importance to society, but our policies strictly prohibit invoking or threatening violence.'

The Anti-Defamation League tries to portray itself as an ally of Black Lives Matter while shielding Israel from criticism for its abuses of Palestinian rights. Wisam Hashlamoun ZUMA Press

For those who yearn for an end to systemic racism, these are exhilarating times as Black activists and organizations lead a global uprising against symbols and structures of white supremacy.

But if you are a racist group masquerading as a civil rights organization, these days are fraught with the danger that you’ll get found out.

It’s a balancing act that has for years bedeviled the Anti-Defamation League, a major Israel lobby group in the United States.

Its counterparts in the UK are facing the same challenge.

The crisis is particularly acute right now as the ADL tries to portray itself as an ally of Black Lives Matter while also shielding Israel from criticism over its plans to annex Palestinian land in the occupied West Bank, further entrenching the system of apartheid.

The memo sets out how the lobby group can, in Leifer’s words: “find a way to defend Israel from criticism without alienating other civil rights organizations, elected officials of color and Black Lives Matter activists and supporters.”

The gist of the strategy is to allow some soft criticism of Israel while fending off more precise and accurate descriptions of Israel’s violations of Palestinian rights as “apartheid” and “separate but equal” – the latter a term long used to whitewash violently enforced, legalized racial segregation and subjugation in the United States.

The authors of the memo fear that a clash with progressive forces over annexation could put ADL on the “wrong side” of the Black Lives Matter movement and “challenge relationships between ADL and many civil rights organizations and coalitions.”

It is ironic that the ADL fears Israel being associated with apartheid.

While the Israeli-armed South African apartheid regime was still destroying Black lives in that country in the 1980s and 1990s, the ADL ran a massive spy ring in the United States.

The latest ADL leak confirms concerns that were revealed in a private report obtained by The Electronic Intifada in 2017.

That report – jointly written by the ADL and the Reut Institute, an Israeli think tank – lamented that Palestinian rights campaigners have been “able to frame the Palestinian struggle against Israel as part of the struggle of other disempowered minorities, such as African Americans, Latinos and the LGBTQ community.”

The report recommended that Zionist groups try to disrupt this dynamic by “Partnering with other minority communities based on shared values and common interests such as on criminal justice reform, immigration rights or in fighting against racism and hate crimes.”

Today the ADL sees Black Lives Matter as a chance to burnish its “civil rights” street cred while advancing its anti-Palestinian agenda.

Dat gaat lekker daar inderdaad. Twee weken geleden had Chicago een record, 104 neergeschoten en 14 doden in één weekend.
You only live once, so be sure to spend fifteen hours a day staring at a screen seeking the approval of strangers
zondag 5 juli 2020 @ 12:06:18 #12

Do you still support the #BlackLivesMatter movement?

BLM protesters outside the White House: 'We need a revolution in order to overthrow this system and bring a whole new #communist world into being' 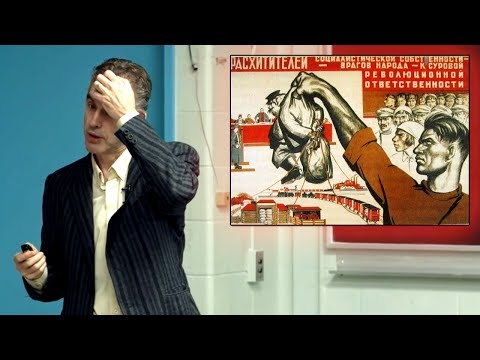 Refuse Fascism, a front group for the Revolutionary Communist Party, and BLM protesters outside the White House: “We need a revolution in order to overthrow this system and bring a whole new communist world into being."
Video by @FordFischer.
https://t.co/mzEA1Az2G0 reageer retweet

Refuse Fascism, a front group for the Revolutionary Communist Party, and BLM protesters outside the White House: “We need a revolution in order to overthrow this system and bring a whole new communist world into being."
Video by @:FordFischer.
https://t.co/mzEA1Az2G0 reageer retweet

“The fundamental cause of the trouble in the modern world today is that the stupid are cocksure while the intelligent are full of doubt.”— Bertrand Russell
zondag 5 juli 2020 @ 20:39:19 #40

I rest my case.

Only God can save us now

quote:
[A co-founder of Black Lives Matter Toronto argued that white people are “recessive genetic defects” and purportedly mused about how the race could be “wiped out,” according to a post on what appears to be her Facebook page.

Yusra Khogali has faced increased scrutiny over the past year after BLM Toronto gained political influence following their disruption of the Toronto Pride parade and confrontations with Ontario Premier Kathleen Wynne.

On Friday, Toronto Police announced they would not participate in this year’s upcoming parade. This has been a longstanding demand of BLM TO and one that the board of Pride Toronto recently backed in a controversial vote.

Khogali has a track record of inflammatory, divisive rhetoric.

Only last week during a protest in front of the US consulate Khogali shouted into a microphone that “Justin Trudeau is a white supremacist terrorist” and urged the crowd to “rise up and fight back.”

“Look at us, we have the numbers,” she said.

She also faced controversy in the news for a tweet posted a year ago stating: “Plz Allah give me strength to not cuss/kill these men and white folks out here today.”

While these remarks alarmed many Canadians, they pale in comparison to a statement numerous sources forwarded to the Sun that Khogali appears to have posted on Facebook in late 2015.

“Whiteness is not humxness,” the statement begins. “infact, white skin is sub-humxn.” The post goes on to present a genetics-based argument centred on melanin and enzyme.

“White ppl are recessive genetic defects. this is factual,” the post reads towards the end. “white ppl need white supremacy as a mechanism to protect their survival as a people because all they can do is produce themselves. black ppl simply through their dominant genes can literally wipe out the white race if we had the power to.”

Khogali did not respond to requests for comment from the Sun. But if she did in fact write the post, her thesis doesn’t pass muster for one of America’s leading scholars of the history of eugenics.

“The document mirrors the racism of American eugenicists who claimed in the first third of the 20th century that native whites were genetically superior not only to blacks but also to immigrants from Eastern and Southern Europe,” Daniel Kevles, a professor at Yale University, wrote to the Sun. “Their claims were without any scientific foundation and added up to expressions of naked white racism.”

Kevles’ book “In the Name of Eugenics: Genetics and the Uses of Human Heredity” is considered a leading text in the field.

“The anger and frustration that animates the Black Lives Matter movement is altogether understandable, but the way to contest pseudo-science and white prejudice is not with an alternative pseudo-science and black prejudice,” notes Kevles. “It is with moral argument and political action.”

The BLM TO website explains their stated goals are “to dismantle all forms of state-sanctioned oppression, violence and brutality committed against African, Caribbean, and Black cis, queer, trans, and disabled populations in Toronto.”

There is no indication the group or any of its other members supports the sentiments expressed in the alarming post.

The Sun did not hear back from BLM TO and the main Black Lives Matter umbrella group in the United States following various requests for comment. 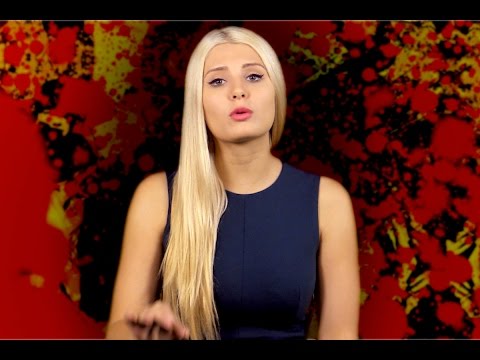 “The fundamental cause of the trouble in the modern world today is that the stupid are cocksure while the intelligent are full of doubt.”— Bertrand Russell
actieve topics nieuwe topics
abonnementen ibood.com bol.com Coolblue
BLM demonstraties in de VS #36