quote:
Opportunity Gets To Work On Interesting Rock

by Staff Writers
Pasadena CA (JPL) Nov 30, 2012
Opportunity, after completing the local area survey around the location called "Matijevic Hill" (named in honor of Jake Matijevic) at the inboard edge of Cape York on the rim of Endeavour Crater, has started conducting an in-situ (contact) science campaign on some high-value surface targets.

On Sol 3137 (Nov. 19, 2012), Opportunity began her in-situ investigation on the surface target, called "Sandcherry" with a Microscopic Imager (MI) mosaic, followed by the placement of the Alpha Particle X-ray Spectrometer (APXS).

The plan on Sol 3139 (Nov. 22, 2012), was the use the Rock Abrasion Tool (RAT) to brush the target. However, the robotic arm experienced a stall in the shoulder elevation joint and stopped all further robotic arm activity.

The sequenced APXS measurement on Sol 3140 (Nov. 23, 2012), then fortuitously became an atmospheric argon measurement. The joint stall had been experienced before with Opportunity when slow moves are commanded as in this instance.

However, the engineering team did review all the associated telemetry and found no indication of any change in the health of the joint.

As a further step, a diagnostic move was included at the start of the plan on Sol 3144 (Nov. 27, 2012). That diagnostic showed a nominally functioning joint.

The subsequent activity on Sol 3144 (Nov. 27, 2012), included a successful RAT brushing of the target followed by a MI mosaic and placement of the APXS.

Also, over the last several sols, the rover has been collecting an extensive color panorama (Pancam), called the "Matijevic pan." quote:
An international research team led by the Planetary Science Institute has found evidence that indicates that approximately 2 billion years ago enormous volumes of catastrophic floods discharges may have been captured by extensive systems of caverns on Mars, said PSI Research Scientist, J. Alexis Palmero Rodriguez.

Rodriguez and the research team came to this conclusion after studying the terminal regions of the Hebrus Valles, an outflow channel that extends approximately 250 kilometers downstream from two zones of surface collapse.

The Martian outflow channels comprise some of the largest known channels in the solar system.

Although it has been proposed their discharge history may have once led to the formation of oceans, the ultimate fate and nature of the fluid discharges has remained a mystery for more than 40 years, and their excavation has been attributed to surface erosion by glaciers, debris flows, catastrophic floodwaters, and perhaps even lava flows, Rodriguez said.

The PSI-led teams' work documents the geomorphology of Hebrus Valles, a Martian terrain that is unique in that it preserves pristine landforms located at the terminal reaches of a Martian outflow channel. These generally appear highly resurfaced, or buried, at other locations in the planet.

Rodriguez and his co-authors propose in an article titled "Infiltration of Martian overflow channel floodwaters into lowland cavernous systems" published in Geophysical Research Letters that large volumes of catastrophic floodwaters, which participated in the excavation of Hebrus Valles, may have encountered their ultimate fate in vast cavernous systems.

They hypothesize that evacuated subsurface space during mud volcanism was an important process in cavern development. Mud volcanism can expel vast volumes of subsurface volatiles and sediments to the surface.

But because evacuation of subsurface materials generally occurs within unconsolidated sediments resulting caverns are transient and mechanically highly unstable.

However, the investigated Martian caverns appear to have developed within permafrost, which at -65 degrees Celsius (-85 degree Fahrenheit) - a typical mean annual surface temperature for the investigated latitudes - has a mechanical strength similar to that of limestone. Limestone rocks host most of the terrestrial cavern systems.

Possible cavern have been recently identified on Mars and their existence has caught much scientific and public attention because of their potential as exobiological habitats. However, their age and dimensions remain uncertain.

The discovery of vast caverns that existed in ancient periods of Mars shows that these habitats may have in fact existed during billions of years of the planet's history, Rodriguez said. 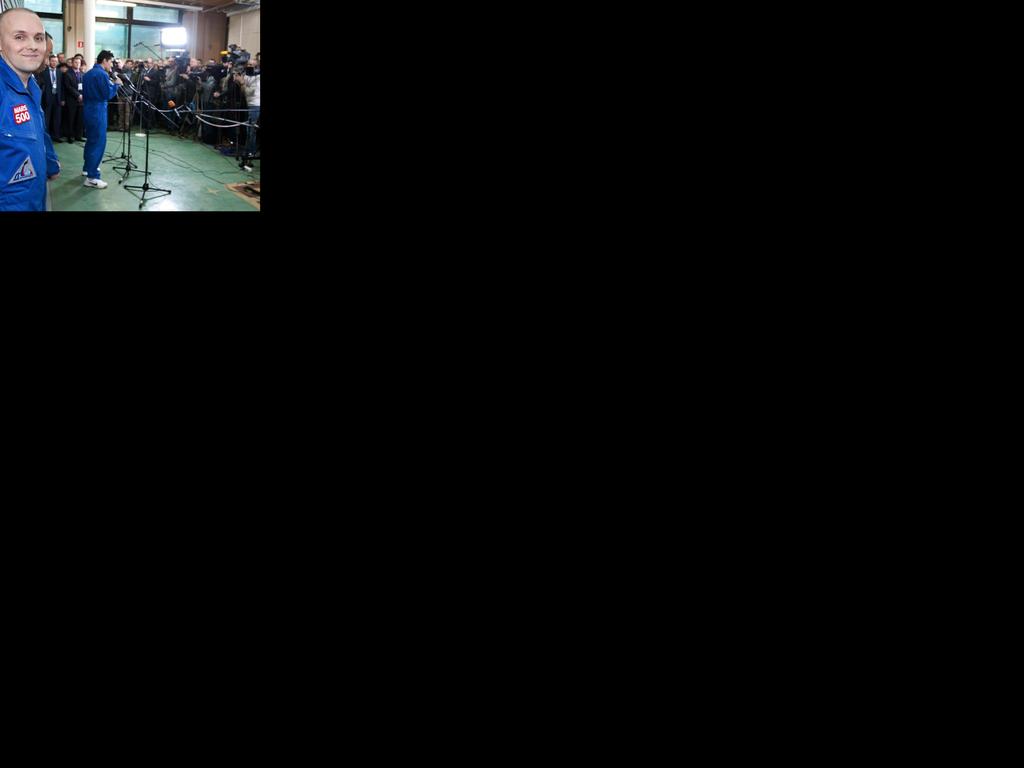 The tool is a motorized, wire-bristle brush on the turret at the end of the rover's arm. Its first use was on the 150th Martian day, or sol, of the mission (Jan. 6, 2013). MAHLI took this image from a distance of about 10 inches (25 centimeters) after the brushing was completed on this rock target called "Ekwir_1." The patch of the rock from which dust has been brushed away is about 1.85 inches by 2.44 inches (47 millimeters by 62 millimeters). The scale bar at bottom right is 1 centimeter (0.39 inch). Mars One, a Netherlands-based non-profit company that hopes to deliver the first humans to the Red Planet by 2023, has issued a list of basic requirements for those willing to become Mars colony pioneers.

The most important criteria are to be at least 18 years old, to be intelligent, in good mental and physical health and to be dedicated to the project. Candidates will be subject to a prolonged televised selection process that will begin later this year.

"Gone are the days when bravery and the number of hours flying a supersonic jet were the top criteria," Norbert Kraft, Mars One's chief medical director and a former NASA researcher, said in a statement. "Now, we are more concerned with how well each astronaut works and lives with the others, in the long journey from Earth to Mars and for a lifetime of challenges ahead."

The first colonists will land on the Red Planed in April 2023. New members will arrive every two years after that.
None of the Red planet pioneers, the company notes, will ever return to the Earth.

To cover the mission costs, about $6 billion, Mars One says it will launch a reality show, a sort of interplanetary reality show a la "Big Brother", and raise the needed funds by selling corporate sponsorships.

Mars One estimates that it will cost about $6 billion to put the first four astronauts on Mars. While this may seem like a daunting sum for a non-governmental entity, the company is confident it can raise the needed funds by selling corporate sponsorships.

While candidates for the Mars mission will be undergoing the selection process and the whole planet will be observing it on their TVs, Mars One will launch a communications satellite and a supply mission to Mars in 2016, then send a large rover to the Red Planet in 2018, according to the video.

The rover will find the most suitable site for the new Mars colony. After that in 2020 the company will send all necessary settlement components - habitat units, life-support equipment and another rover.

Mars One officials admit they have already approached a number of private spaceflight companies and secured one potential supplier for each colony component. SpaceX's Falcon Heavy rocket which is still under development but expected to perform its first flight next year, is expected to deliver many components of the first colony to the Red Planet.

"None of the Red planet pioneers, the company notes, will ever return to the Earth".
Het is geen baantje voor een Flexwerker

quote:
"None of the Red planet pioneers, the company notes, will ever return to the Earth".
Het is geen baantje voor een Flexwerker The subsurface environment on Mars may hold clues to the origin of life, scientists argue in a recently published research article led by Planetary Science Institute's Joseph Michalski. A large fraction of the life on Earth may exist as microbes deep underground on our home planet. The same could have been true in the past on Mars.

"Here, we argue that all of the ingredients for life existed in the subsurface, and it may have been the most habitable part of Mars."

In some cases, those deep fluids, which could have harbored life, have emerged from the subsurface in deep basins, he said.

Michalski found that McLaughlin Crater, one of the deepest craters on Mars, contains evidence of clays and carbonates that probably formed in an alkaline, groundwater-fed lake.

McLaughlin Crater has a diameter of 57 miles and a depth of 1.4 miles.

"Taken together, the observations in McLaughlin Crater provide the best evidence for carbonate forming within a lake environment instead of being washed into a crater from outside. It would have been an alkaline lake, a habitable environment for microbial life," said PSI Research Scientist Michalski, lead author of the recently published Nature Geosciences paper "Groundwater Activity on Mars and Implications for a Deep Biosphere".

"The most interesting aspect of Mars science, perhaps, is that the planet might provide a window into our own past. The environmental conditions on Earth and Mars were likely similar early on, at least in the subsurface," Michalski said.

"Exploring those rocks on Mars would be like finding a stack of pages that have been ripped out of Earth's geologic history book. Whether they contain life or not, they would certainly teach us a tremendous amount about early chemical processes in the solar system."

PASADENA, Calif. -- NASA's Mars Exploration Rover Opportunity, one of the twin rovers that bounced to airbag-cushioned safe landings on Mars nine years ago this week, is currently examining veined rocks on the rim of an ancient crater.

Opportunity has driven 22.03 miles (35.46 kilometers) since it landed in the Meridiani Planum region of Mars on Jan. 24, 2004, PST (Jan. 25, Universal Time). Its original assignment was to keep working for three months, drive about 2,000 feet (600 meters) and provide the tools for researchers to investigate whether the area's environment had ever been wet. It landed in a backyard-size bowl, Eagle Crater. During those first three months, it transmitted back to Earth evidence that water long ago soaked the ground and flowed across the surface.

Since then, the mission's team at NASA's Jet Propulsion Laboratory, Pasadena, Calif., has driven Opportunity across the plains of Meridiani to successively larger craters for access to material naturally exposed from deeper, older layers of Martian history.

Opportunity has operated on Mars 36 times longer than the three months planned as its prime mission.

"What's most important is not how long it has lasted or even how far it has driven, but how much exploration and scientific discovery Opportunity has accomplished," said JPL's John Callas, manager of NASA's Mars Exploration Rover Project. The project has included both Opportunity and its twin, Spirit, which ceased operations in 2010.

This month, Opportunity is using cameras on its mast and tools on its robotic arm to investigate outcrops on the rim of Endeavour Crater, 14 miles (22 kilometers) in diameter. Results from this area of the rim, called "Matijevic Hill," are providing information about a different, possibly older wet environment, less acidic than the conditions that left clues the rover found earlier in the mission.

Timed with the anniversary of the landing, the rover team has prepared a color panorama of the Matijevic Hill area. The image is online at: http://www.jpl.nasa.gov/spaceimages/details.php?id=PIA16703 .