VS heeft een probleem #11 No Bahamas for you!

Extra informatie over de coronacrisis in de VS:

See Which States Are Reopening and Which Are Still Shut Down
Handige lijst met de maatregelen per staat.

This State Is in a "Very Bad Situation" and No One Is Talking About It
Death rates have quadrupled and hospitalizations are nearly eight times higher than they were a month ago.

In recent weeks, coronavirus outbreaks in states like Florida, Texas, Arizona, and California have received a lot of attention for their record-breaking numbers. But some medical experts are raising the alarm on other parts of the U.S. where the virus is spreading at an astonishing rate, despite making fewer headlines. In a recent tweet, Harvard Global Health Institute (HGHI) Director Ashish Jha, MD, pointed out that "one small state is experiencing a very bad situation [that] has gotten very little attention: Idaho."

According to data out of the Gem State, all metrics of the disease are beginning to look dire. "Their case numbers are up 1,366 percent since June 15," Jha tweeted.

But those aren't the only figures to skyrocket in Idaho in the past month: The state's positive test rate, which was 3.4 percent just over 30 days ago, is now five times higher, jumping to 18.3 percent; hospitalizations are up 780 percent since June 15 (from 24 to 188); and the death rate has quadrupled from one death every other day to 2.5 deaths daily now.

Heeft George daar geen familie wonen?
“The man who never alters his opinion is like standing water, and breeds reptiles of the mind. - William Blake, The Marriage of Heaven and Hell.
Redactie Frontpage / Sport woensdag 22 juli 2020 @ 00:07:42 #3

Dit is het VS topic

Even snel via Google:

Alabama:
On July 15, Gov. Kay Ivey issued a statewide mask requirement effective from 5:00 pm on July 16 through 5:00 pm on July 31. Prior to that, Birmingham, Mobile, Selma, Montgomery and several other cities had required masks be worn in public places.

Arizona:
No statewide order, but Phoenix and several other Arizona cities require people to wear face coverings in public.

California:
Statewide order requires that everyone in California wear a face mask while in public spaces, both indoor and outdoor. In some parts of California, face coverings with a valve are not permitted, because they can allow exhaled air and droplets escape.

Colorado:
Starting at midnight on July 17 and in effect for 30 days, everyone in the state of Colorado 10 years of age and older must wear a face mask in pubic indoor spaces.

Delaware:
As of May 1, Gov. John Carney is requiring anyone in the state to wear face coverings while in public places and businesses.

District of Columbia:
As of May 13, face masks are required when you are "engaging in essential and minimum basic operations of businesses, when persons are in the presence of others."

Hawaii:
On April 17, Gov. David Ige issued an executive order requiring people to wear face coverings while in (or waiting outside of) essential businesses. In early July, the mayor of Oahu issued an order for people to wear masks in any public setting, with a few exceptions.

Illinois: As of May 1, Illinois residents are required to wear face coverings while in public places where social distancing measures are hard to maintain, such as grocery stores, pharmacies and other essential businesses.

Kansas:
As of July 3, any person in Kansas is required to wear a mask or other face covering in most public settings.

Kentucky:
As of July 15, people in the state must wear a mask in public places, including in outdoor areas where you can't maintain a distance of 6 feet from others.

Louisiana:
As of July 11, everyone over the age of 8 in Louisiana must wear a face covering in public, with some exceptions.

Maine:
Gov. Janet Mills issued an order for anyone in Maine to wear a face mask in public back in April. In July, she signed a new executive order requiring businesses to enforce the order by denying entry for people not wearing a mask.

Massachusetts:
As of May 6, Gov. Charlie Baker has ordered residents to wear face coverings while in public places where social distancing is hard to maintain.

Maryland:
On April 15, Gov. Larry Hogan signed an order for Maryland residents to begin wearing face coverings in food and retail establishments and when taking public transportation. The order says this will be a requirement as long as the state of emergency is still in effect.

Michigan:
As of July 10, everyone in the state must wear a face covering in any indoor or outdoor public space.

Minnesota:
While several cities in Minnesota have mask orders, the state does not. However, as of July 9, Gov. Tim Walz has said he is considering a statewide mandate.

Mississippi:
As of July 13, Gov. Tate Reeves issued an executive order for 13 counties requiring employees of essential and retail businesses to wear masks while working, and for the general public to wear masks at social gatherings.

Nevada:
On June 24, Gov. Steve Sisolak issued a mandatory order for all people in Nevada to wear masks in public spaces.

New Jersey:
Jersey was one of the first states to instate a mandatory order to wear masks in public spaces. As of July 8, that includes both indoor and outdoor spaces.

New Mexico:
As of May 16, all New Mexico residents are required to wear a face covering while out in public, including while exercising.

New York:
As of April 15, everyone in the state is required to wear mask when outside of the home.

North Carolina:
As of June 26, everyone is required to wear a face mask while in public, with a few exceptions.

Pennsylvania:
As of July 1, everyone in the state must wear a mask when they leave their home.

Rhode Island:
As of July 4, Gov. Gina Raimondo extended the state's order requiring people to wear a mask in public both indoors and outdoors.

Texas:
As of July 3, all residents are ordered wear a face covering in public, though counties with 20 or fewer active cases of the coronavirus can be exempt from the order. However, many counties have opted out of the order and others aren't enforcing it.

Virginia:
On May 26, Gov. Ralph Northam announced that everyone over the age of 10 in Virginia is required to wear a face covering in public places such as retail establishments, restaurants, public transportation and anywhere else people congregate.

Washington:
People are now required to wear face coverings in public spaces, both indoors and outdoors where social distancing is not possible.

West Virginia:
As of July 6, everyone age 9 and older is required to wear a mask in indoor public spaces where social distancing is not possible.

Wisconsin:
Face masks are required only in parts of the state, though the governor is considering a statewide order.


Alaska:
No statewide order requiring masks, but the state encourages people to wear them and the city of Anchorage requires them to be worn in indoor public spaces.

Florida:
Florida's Department of Public Health encourages, but does not require, people to wear a mask in any setting where social distancing isn't possible. However, several counties and cities in the state have issued mandates for people to wear masks in those areas. Those include, but are not limited to, Orange County, Daytona Beach, New Smyrna Beach and Seminole County.

Georgia:
On July 15, Gov. Brian Kemp suspended all mask orders in the state of Georgia that individual cities, including Savannah and Atlanta, had enacted. Currently the state government is merely encouraging people to wear masks, but there is no statewide order.

Iowa:
There is no statewide order and on July 8 Gov. Kim Reynolds said that an order put in place by the mayor of Muscatine requiring people there to wear masks is invalid.

Indiana:
No statewide order, but several cities and counties in Idaho have orders in place. However, the Indiana State Department of Health recommends everyone wear a mask.

Missouri:
Gov. Mike Parson says that wearing a face covering is "up to the individual," though state health officials recommend that everyone do so. Several counties and cities, including Kansas City and St. Louis, have orders in place.

Montana:
As of July 2, Gov. Steve Bullock strongly recommends that residents continue to wear face masks -- but there's no mandate.

Nebraska:
There is no statewide mandate for the general public. Counties in the state may create their own orders, but Gov. Pete Ricketts said that any county that denies public services because someone is not wearing a mask will not receive any federal relief coronavirus funds.

New Hampshire:
There's no statewide mandate, but on May 22 the Nashua City Council approved a mandate requiring people to wear face coverings when entering a public establishment.

North Dakota:
On May 1, Gov. Doug Burgum started to reopen the state without requiring face coverings.

Ohio:
As of July 9, people in several counties -- including Franklin, Trumbull, Hamilton, Butler and Montgomery -- are required to wear masks, according to Gov. Mike DeWine.

Oklahoma:
Gov. Kevin Stitt said on July 9 that he opposes a statewide mask mandate. However, several cities in Oklahoma, including Tulsa and Oklahoma City, are considering mask orders.

South Carolina:
The South Carolina Department of Health and Environmental Control strongly encourages people to wear face coverings in public, but there is no mandate. Several cities in South Carolina have mandatory orders in place.

South Dakota:
The South Dakota Department of Health recommends that people wear face coverings, though they are optional.

Tennessee:
As of July 3, mayors in the state have the authority to issue local mask requirements, but there is no statewide order.

Utah:
As of July 2, masks are required in only some parts of the state.

Vermont:
As of May 1, masks are only required while riding on public transportation.

Wyoming: The state recommends masks, but does not require them. Gov. Mark Gordon has echoed the recommendation, but hasn't issued a statewide order. 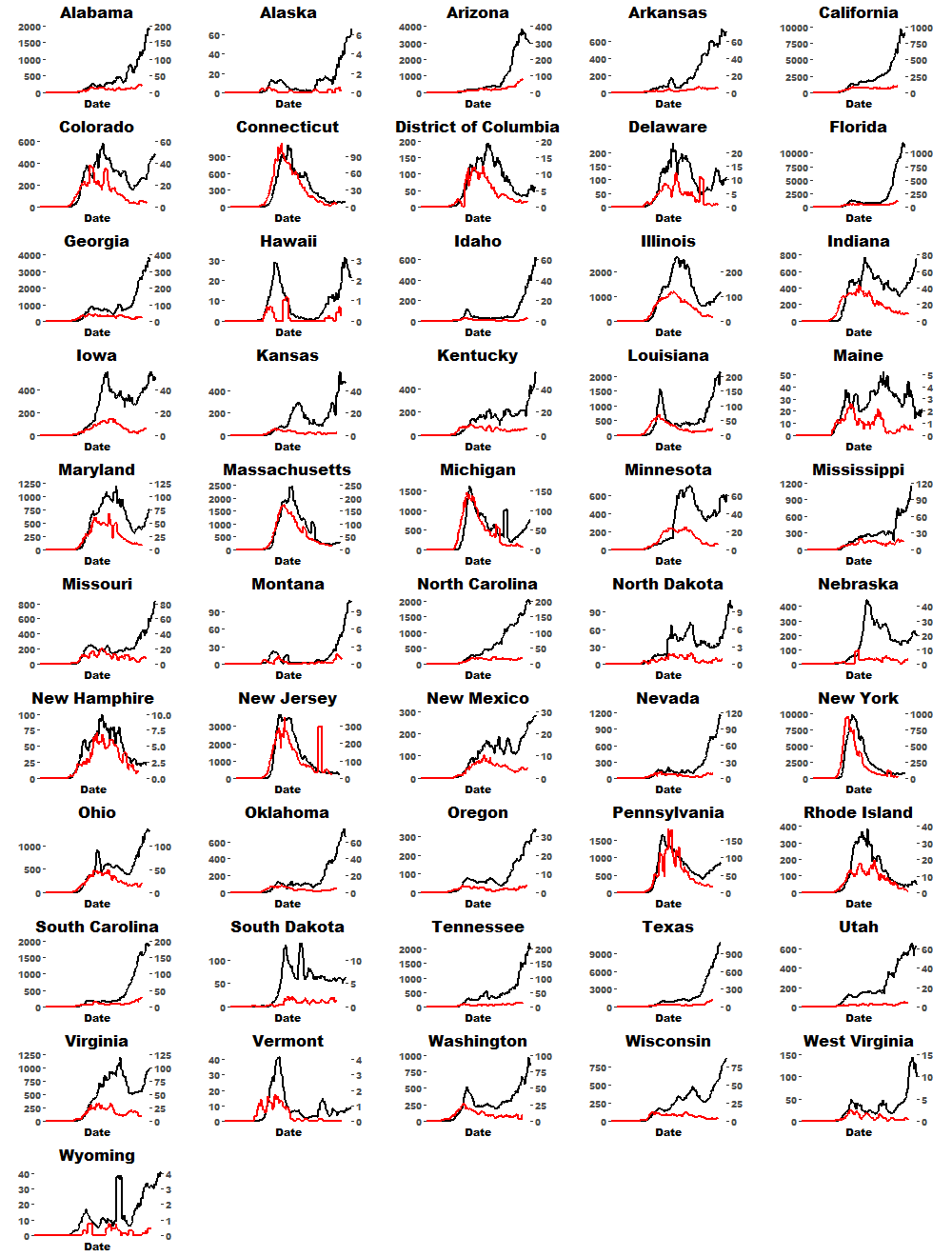 Centuries in a lifetime

Crooked Hillary
“Political correctness is tyranny with manners"-- Charlton Heston (1999)
"If Fascism Ever Comes To America, It Will Come In The Name Of Liberalism" -- Ronald Reagan (1975)
"Socialsm...feeling hungry and misrable with a friend" -- Common sense (2018)
actieve topics nieuwe topics
abonnementen ibood.com bol.com Coolblue
VS heeft een probleem #11 No Bahamas for you!