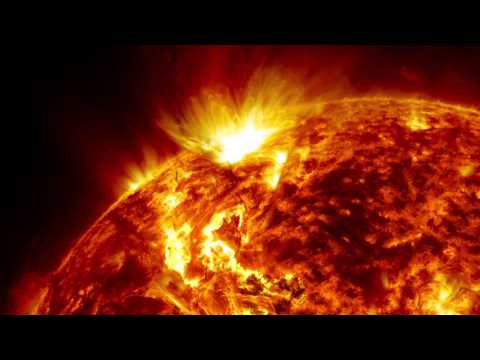 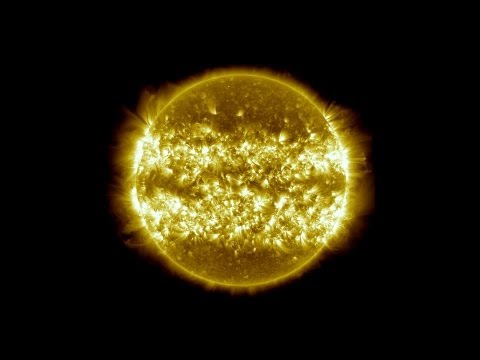 A Type IV Radio Emission was registered at 21:50 UTC. Type IV emissions occur in association with major eruptions on the Sun and are typically associated with strong coronal mass ejections (CMEs) and solar radiation storms. However, the plasma cloud appears to be headed to the northwest and away from our planet.

The location of this region does not favor Earth-directed CMEs.

A 10cm Radio Burst (peak flux 110 sfu) beginning at 12:56 and lasting 1 minute was associated with this event. A 10cm radio burst indicates that the electromagnetic burst associated with a solar flare at the 10cm wavelength was double or greater than the initial 10cm radio background. This can be indicative of significant radio noise in association with a solar flare. This noise is generally short-lived but can cause interference for sensitive receivers including radar, GPS, and satellite communications.

Geoeffective Active Region 2673 produced 7 M-class and at least 8 C-class solar flares on September 4, 2017. The strongest was M5.5 at 20:33 UTC associated with an asymmetric full halo Coronal Mass Ejection (CME). This region has the potential to produce more strong to major eruptions on the Sun, including X-class flares. Its location currently favors Earth-directed CMEs.

This impressive region grew vigorously over the past 48 hours, suddenly becoming one of the largest regions of the year. It now has 'beta-gamma-delta' magnetic configuration and is capable of producing strong to major eruptions on the Sun. Since the region will remain geoeffective today and in the days ahead, Earth-directed CMEs are likely.

Type II emissions occur in association with eruptions on the Sun and typically indicate a CME was produced. A 10cm radio burst indicates that the electromagnetic burst associated with a solar flare at the 10cm wavelength was double or greater than the initial 10cm radio background. This can be indicative of significant radio noise in association with a solar flare. This noise is generally short-lived but can cause interference for sensitive receivers including radar, GPS, and satellite communications.

In addition, this impressive event was associated with a 10cm Radio Burst lasting 3 minutes with peak flux of 12000 sfu.

Today's X9.3 is the strongest solar flare of Solar Cycle 24. Although X-class solar flares were expected (25% chance) since Region 2673 rapidly grew into a monster region and attained 'beta-gamma-delta' magnetic configuration, such powerful flare comes as a huge surprise, as our star is heading toward Solar Minimum. The previous record for the strongest flare of the cycle was X6.9 of August 9, 2011. 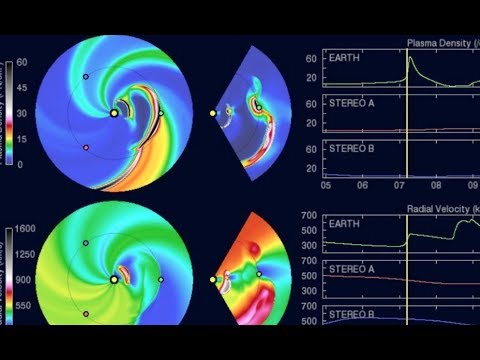 http://spaceweathernews.com/
http://www.solarham.net/
Genesis 6:4 - The Nephilim were on the earth in those days, and also afterward, when the sons of God came in to the daughters of man and they bore children to them. These were the mighty men who were of old, the men of renown.
vrijdag 8 september 2017 @ 14:15:08 #6 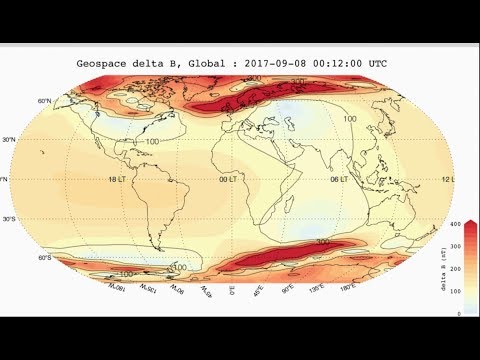 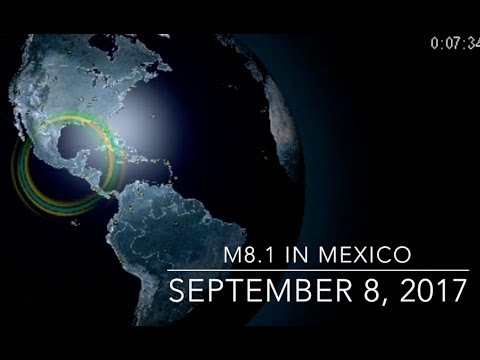 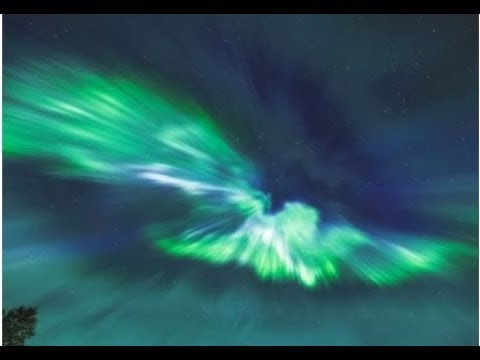 Second X-Flare in Two Months Signals the Grand Solar Minimum is Intensifying (450)
In Zeeland is het vooralsnog slechts nat.
Genesis 6:4 - The Nephilim were on the earth in those days, and also afterward, when the sons of God came in to the daughters of man and they bore children to them. These were the mighty men who were of old, the men of renown.
Moderator vrijdag 8 september 2017 @ 14:28:18 #7

This is the third M-class solar flare of the day and the 18th since September 4, when the first M-class solar flare erupted from this region. Over those 4 days, we have also registered 3 major solar flares - X2.2, X9.3 and X1.3 and several Earth-directed CMEs. Some of them have already hit our planet, causing G4 - Severe geomagnetic storming.

There were no radio signatures associated with today's M8.1 flare suggesting a Coronal Mass Ejection (CME) was produced.

This is amazing! AR 12740, which is an old cycle region and I honestly have not expected much, has produced a C9.9 (almost M-class) flare. The flare was very short duration, but note the spectacular large-scale coronal propagating front in the difference movie! https://t.co/LVwMsVdrEq reageer retweet

A Type II Radio Emission with an estimated velocity of 740 km/s was associated with the event, suggesting a Coronal Mass Ejection (CME) was produced by the flare event.

The current position of this region does not favor Earth-directed flares.

WASHINGTON (Reuters) - Troves of new data from a NASA probe’s close encounters with the sun are giving scientists unique insight about the solar wind and space weather more generally as the spacecraft zooms through the outermost part of the star’s atmosphere.

Researchers on Wednesday described the first published findings from the Parker Solar Probe, a spacecraft launched in 2018 to journey closer to the sun than any other human-made object. The findings, offering fresh details about how the sun spawns space weather, are reshaping astronomers’ understanding of violent solar wind that can hamper satellites and electronics on Earth.

“We were certainly hoping we’d see new phenomena and new processes when we got close to the sun - and we certainly did,” Nicola Fox, director of the U.S. space agency’s heliophysics division, told reporters. “Some of the information that we found pretty much confirmed what we expected, but some of it is totally unexpected.”

The probe has endured extreme heat while flying through the outermost part of the sun’s atmosphere, called the solar corona, that gives rise to solar wind - the hot, energized, charged particles that stream outward from the Sun and fill the solar system.

Oscillations in the speed of these charged particles beaming outward from the solar corona have previously been thought to dissipate gradually, much like the waves seen after plucking a guitar string fading from the middle.

One of the probe’s “really big surprises,” according to one of the researchers, was the detection of sudden, abrupt spikes in the speed of the solar wind that were so violent that the magnetic field flips itself around, a phenomenon called “switchbacks.”

“We’re finding these discrete, powerful waves that wash over the spacecraft, kind of like rogue waves in an ocean,” said Justin Kasper, a principal investigator whose team at the University of Michigan built a solar wind-sensing instrument on the Parker probe. “They carry a tremendous amount of energy.”

“This will dramatically change our theories for how the corona and solar wind are being heated,” Kasper added.

Cosmic radiation is increasing since 2014 when Solar Cycle 24 peaked and the Sun headed toward very deep Solar Minimum we are experiencing right now. SC24 reached its maximum in April 2014 with 23 months smoothed sunspot number of only 81.8 -- one of the weakest solar cycles on record.

In 2019, the Sun has been without spots for 270 days or 77%, as of December 16, which is the highest number of spotless days on the Sun since the Space Age began in 1957 with the launch of Sputnik 1 by the Soviet Union.

"As 2019 comes to a close, neutron monitors at Sodankyla Geophysical Observatory in Oulu, Finland are approaching those same levels. Indeed, a new record could be just weeks or months away," Dr. Tony Phillips of the SpaceWeather.com notes.

"Neutron monitors in Oulu are getting results similar to ours," Phillips said, referring to Earth to Sky Calculus cosmic ray measurements. "Oulu data show that cosmic rays have been increasing for the past 5 years and, moreover, are within percentage points of the Space Age record."

"We use X-ray and gamma-ray detectors sensitive to energies in the range 10 keV to 20 MeV," Phillips said.

"This type of radiation, which you can also find in medical X-ray machines and airport security scanners, has increased more than 20% in the stratosphere."

A new study published in the Nature Scientific Reports on July 13 suggests that powerful eruptions on the Sun can trigger large earthquakes on Earth. In the paper, the authors analyzed 20 years of proton density and velocity data, as recorded by the SOHO satellite, and the worldwide seismicity in the corresponding period, as reported by the ISC-GEM catalogue. They found a clear correlation between proton density and the occurrence of large earthquakes (M > 5.6), with a time shift of one day.

The Sun may seem relatively docile, but it is constantly bombarding the solar system with energy and particles in the form of the solar wind.

Sometimes, eruptions on the Sun's surface cause coronal mass ejections that hurtle through the solar system at extremely fast rates.

The new study suggests that particles from eruptions like this may be responsible for triggering groups of powerful earthquakes.

"Large earthquakes all around the world are not evenly distributed-- there is some correlation among them," said co-author Giuseppe De Natale, research director at the National Institute of Geophysics and Volcanology in Rome, Italy.

"We have tested the hypothesis that solar activity can influence the worldwide [occurrence of earthquakes]."

Scientists noted a pattern in some massive earthquakes around the planet-- they tend to occur in groups, not randomly. This indicates that there may be some global phenomenon triggering these worldwide tremors.

To address this, researchers searched through 20 years of data on both earthquakes and solar activity-- specifically from NASA-ESA’s Solar and Heliospheric Observatory (SOHO) satellite-- seeking any probable correlations.

SOHO, located about 1.45 million km (900 000 miles) from our planet, monitors the Sun, which helps scientists track how much solar material strikes the Earth.

When protons from the Sun peaked, there was also a spike in earthquakes above M5.6 for the next 24 hours.

"This statistical test of the hypothesis is very significant," said De Natale. "The probability that it's just by chance that we observe this, is very, very low-- less than 1 in 100 000."

After noticing there was a correlation between solar proton flux and strong earthquakes, the researchers went on to propose a mechanism called the reverse piezoelectric effect.

Compressing quartz rock, something common in the Earth's crust, can produce electrical pulse through a process called the piezoelectric effect. The researchers think that such small pulses could destabilize faults that are nearing rupture, triggering earthquakes. Signals from electromagnetic evens, such as earthquake lightning and radio waves, have been recorded occurring alongside quakes in the past.

Meanwhile, this new explanation suggests that electromagnetic anomalies are not the result of earthquakes, but cause them instead. As positively charged protons from the Sun hit the Earth's magnetic bubble, they generate electromagnetic currents that propagate across the world. Pulses created by these currents go on to deform quartz in the crust, ultimately triggering earthquakes.

Abstract
Large earthquakes occurring worldwide have long been recognized to be non Poisson distributed, so involving some large scale correlation mechanism, which could be internal or external to the Earth. Till now, no statistically significant correlation of the global seismicity with one of the possible mechanisms has been demonstrated yet. In this paper, we analyze 20 years of proton density and velocity data, as recorded by the SOHO satellite, and the worldwide seismicity in the corresponding period, as reported by the ISC-GEM catalogue. We found clear correlation between proton density and the occurrence of large earthquakes (M > 5.6), with a time shift of one day. The significance of such correlation is very high, with probability to be wrong lower than 10–5. The correlation increases with the magnitude threshold of the seismic catalogue. A tentative model explaining such a correlation is also proposed, in terms of the reverse piezoelectric effect induced by the applied electric field related to the proton density. This result opens new perspectives in seismological interpretations, as well as in earthquake forecast.