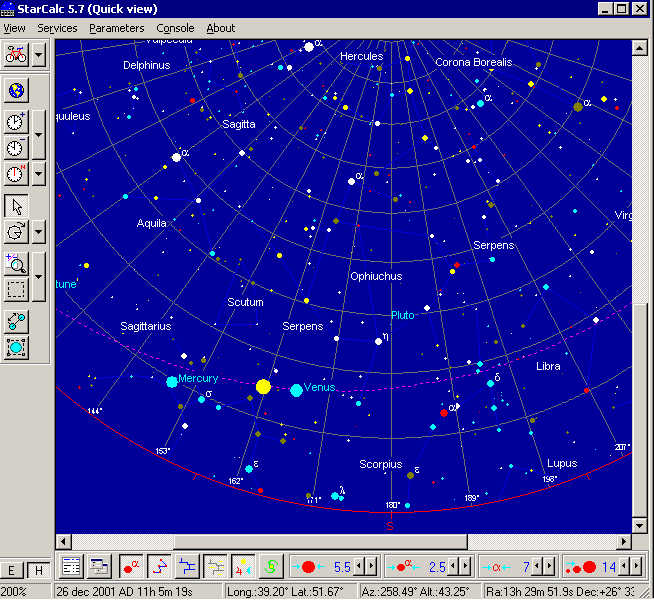 * 11:15, restate my assumptions: 1. Mathematics is the language of nature. 2. Everything around us can be represented and understood through numbers. 3. If you graph these numbers, patterns emerge. Therefore: There are patterns everywhere in nature.*
dinsdag 19 oktober 2004 @ 22:26:38 #9

Solar physicist David Hathaway has been checking the sun every day since 1998, and every day for six years there have been sunspots. Sunspots are planet-sized "islands" on the surface of the sun. They are dark, cool, powerfully magnetized, and fleeting: a typical sunspot lasts only a few days or weeks before it breaks up. As soon as one disappears, however, another emerges to take its place.

Even during the lowest ebb of solar activity, you can usually find one or two spots on the sun. But when Hathaway looked on Jan. 28, 2004, there were none. The sun was utterly blank.

It happened again last week, twice, on Oct. 11th and 12th. There were no sunspots.

"This is a sign," says Hathaway, "that the solar minimum is coming, and it's coming sooner than we expected."

Solar minimum and solar maximum - "Solar Min" and "Solar Max" for short -are two extremes of the sun's 11-year activity cycle. At maximum, the sun is peppered with spots, solar flares erupt, and the sun hurls billion-ton clouds of electrified gas toward Earth.
[...]
"Contrary to popular belief," says Hathaway, "the solar cycle is not precisely 11 years long." Its length, measured from minimum to minimum, varies: "The shortest cycles are 9 years, and the longest ones are about 14 years."
[...]
"We examined data from the last 8 solar cycles and discovered that Solar Min follows the first spotless day after Solar Max by 34 months," explains Hathaway.

The most recent solar maximum was in late 2000. The first spotless day after that was Jan 28, 2004. So, using Hathaway and Wilson's simple rule, solar minimum should arrive in late 2006. That's about a year earlier than previously thought.

The next solar maximum might come early, too, says Hathaway. "Solar activity intensifies rapidly after solar minimum. In recent cycles, Solar Max has followed Solar Min by just 4 years." Do the math: 2006 + 4 years = 2010.

Hier een overzicht van veel astronomie software.
* 11:15, restate my assumptions: 1. Mathematics is the language of nature. 2. Everything around us can be represented and understood through numbers. 3. If you graph these numbers, patterns emerge. Therefore: There are patterns everywhere in nature.*
woensdag 20 oktober 2004 @ 20:42:49 #12

Voor de serieuze amateur is het wel fantastisch.
* 11:15, restate my assumptions: 1. Mathematics is the language of nature. 2. Everything around us can be represented and understood through numbers. 3. If you graph these numbers, patterns emerge. Therefore: There are patterns everywhere in nature.*
zaterdag 23 oktober 2004 @ 14:08:36 #20

Newly discovered galactic highways cut across the Milky Way
at odd angles, bringing stars through the neighborhood of our solar system.

The roads of rebels could be part of a galaxywide system of
divergent stellar byways, researchers say.

The sun and most other stars in our Milky Way orbit the
galactic center on fairly routine, circular paths.
So astronomers were surprised to find in a new survey that
about 20 percent of the stars within 1,000 light-years of the sun
are moving on a bunch of offbeat trajectories.

The sun is at "a crossroads of many streams," according to a
research team that examined data on more than 100,000 stars
gathered by the European Space Agency's Hipparcos satellite.
The routes are mostly headed toward or away from the galactic center,
like spokes on a wheel. Stars on each of the courses vary significantly
in age and composition, suggesting they had different origins and haven't
always been on their present paths.

So what caused all the commotion?

Famaey's team says the stars have been gravitationally
stirred by the spiral arms of the Milky Way. Each arm is
packed with more stars and gas than the areas between the arms.
These density waves, as astronomers call them,
compress gas and force star formation.
They can also deflect the motion of stars.

"If these stars are kicked by a spiral arm, they can be displaced
thousands of light-years away from their birthplace," Famaey said.

While the setup might sound chaotic, there is little if any additional
threat to our solar system. In principle, the newly realized star-paths
mean the chance of a collision or other interaction with the sun is greater
than was previously known, said Alain Jorissen, also of Université Libre.

"But in practice," Jorissen told SPACE.com, "average distances between
stars are so large anyway that the chance of a close encounter remains quite small."

Eventually, most of the rebels will be straightened out.
Over time, the disruptive effect of a spiral arm will vanish as a star moves
away from the arm and the galaxy's collective gravity takes over.

"It is likely that the star will then find itself on a more conventional orbit," Jorissen said.

The next close call

The closest know stars are a trio that make up the Alpha Centauri system,
which is 4.36 light-years away.
A light-year is the distance light travels in a year, about 6 trillion miles (10 trillion kilometers).

Meanwhile, our next known close encounter with another
star will occur 1.4 million years from now.

A star named Gliese 710, found by Hipparcos and reported in 1999,
will pass within 1 light-year of the sun.
That puts it some 70,000 times the distance from Earth to the sun,
on the very fringes of our solar system where icy objects are thought to
roam in what's known as the Oort Cloud. Such stellar close calls in the past
are thought to have rerouted comets from the Oort Cloud toward the inner solar system,
where some hit Earth.

Gliese 710 "does not seem to belong to one of our streams," Jorissen said.

To turn the Hipparcos data into a 3-D view of the solar neighborhood,
the researchers added observations on each star's movement collected
by a Swiss telescope at the Observatoire de Haute-Provence in France.