quote:
Anarchy, in-jokes and trolling: the GameStop fiasco is 4chan-think in action

The redditors’ logic is one I recognise from my teens: intentionally senseless, a joke rather than a philosophy. And nobody wants a joke explained

During my late teens, around 2005, a group of high school friends and I (boys, nerds; mean together, meek apart) discovered the website 4chan and it occupied us for a couple of years. Its appeals: anarchy, in-jokes, and abrogation of responsibility.

4chan hosts a variety of image boards with subjects ranging from “pornography” to “alternative sports”, but we were enamoured with /b/. This was the “random” board, where users were permitted to post anything as long as it wasn’t illegal, and every post was anonymous. Whenever a trend emerged its origin was, by design, impossible to locate. Every idea, every joke format, every new target, seemed collectively agreed upon, with no single leader or accountable party; ants swarming a carcass. Everyone was a puerile cynic, adopting a posture of ironised defensiveness, an attempt on the part of the deeply uncool to create a virtual world over which they ruled. Here I first encountered memes, lurkers, shitposting, trolling, and much else that would eventually erupt from this niche like pus from a wound.

Above all, my friends and I found 4chan funny. Mostly well-behaved in our offline lives (aside from the group pyromaniac), the website provided a space where we could liberate ourselves from the strictures of the everyday, and access what felt at the time like an exclusive club, with a vocabulary and humour inaccessible to normies (how embarrassing, in retrospect).

I don’t remember ever posting, but I do remember the rush of “getting it”, knowing the reference, deciphering the slang. What I’m describing, I see now, is the comfort of community, but this particular community depended on the same kind of exclusivity that fuels our worst traits. (This is why 4chan was a blueprint for white supremacist groups, for school shooting manifestos, and fuelled the rise of Donald Trump’s online fandom.)

Sixteen years later, the New York Stock Exchange is in crisis because the subreddit r/wallstreetbets decided to invest in GameStop – a video game retailer that many presume is on the way out – with such relentless enthusiasm that the stock has become wildly overvalued. As of writing, a redditor who goes by “u/DeepFuckingValue” has turned an investment of around $53,000 into a figure nearing $50,000,000. The tagline for r/wallstreetbets is: “Like 4Chan found a Bloomberg Terminal”.

Despite currently being halfway through a 700-page book about the financial crisis, I remain unequipped to explain the economic mechanics of the GameStop fiasco. I do, however, recognise its chaotic logic. Notably, this logic is currently powering a good cause. Redditors are, as I write, beating Wall Street, exposing the system as being built to benefit the wealthy, and effectively demonstrating that the stock market is a dreadful measure of society’s economic health, wildly detached from material conditions.

They have also exposed how underequipped traditional media is to describe such incidents. Neil Irwin, a senior economics correspondent for the New York Times, tweeted: “Trying to make sense of the Gamestop thing as a 42-year-old who has covered econ and markets for years, I feel like Don Draper sitting back and trying to listen to the Beatles, then giving up after a short while, confused and discomfited.”

The redditors’ motivations were perhaps most accurately described by Matt Levine of Bloomberg, who did not attempt to pin them down: “This is fun, a nice social outing in an age of social distancing, a risky but potentially lucrative collective entertainment.”

The mainstream media struggles to explain events like this because the events are arranged to be indescribable, irreducible, by those external to it. Identifying this slipperiness is particularly important given that the juvenile disposition upon which it is premised is ascendant.

Journalists covering the story have tended to gesture towards possible impetuses, and there are undoubtedly many underlying factors that led to r/wallstreetbets’ choosing GameStop as a “meme stock”, which have surely evolved with the saga (screwing Wall Street; making money; a genuine belief in the fundamentals of GameStop’s business model). However, if we were to reduce this to a single motivation, it is a logic best described with a phrase long ago popular on 4chan, as being (I can’t even type it without shivering with shame), “for the lulz”.

Morally neutral, this philosophy can be directed towards good (destroying hedge funds) or evil (propagating a shockingly successful conspiracy theory that threatens the democratic stability of the nation with the world’s largest military, eventually leading to the storming of the American Capitol) and its charm can be attributed to all kinds of psychologies (loneliness, economic inequality, toxic masculinity). It cannot, however, be read aloud by a serious newsreader when explaining the motivation of a political or social movement. It is intentionally senseless, taking the form of a joke rather than a philosophy. And nobody wants a joke explained.

Looking back, it feels as if there was an awful inevitability to the rise of 4chan-think. In Crowds and Power, Elias Canetti writes that “Only the growth of the crowd prevents those who belong to it creeping back under their private burdens.” To survive it had to spread.

It has been utterly strange to witness a brief and regretful adolescent occupation re-emerge as a prominent cultural force, to see the notions cultivated on 4chan, the transgressive attitudes my teen brain found so luridly fascinating, becoming general. I will admit, that when I see Wall Street suffering for it, the old satisfaction returns. 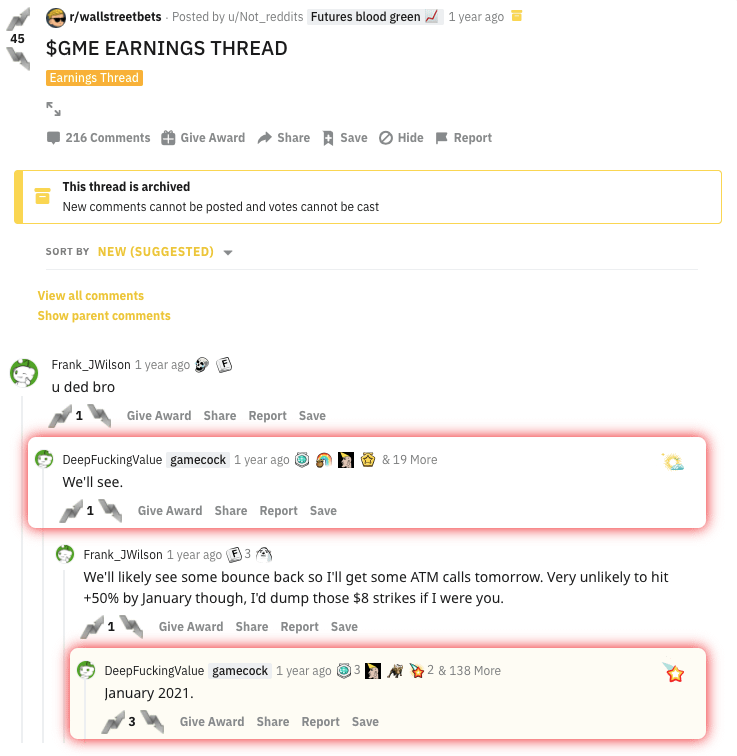 quote:
“The current pandemic has created a unique situation where many people have gotten into day trading and really have no idea exactly what they’re doing,” Galvin said. “It’s something that they’re trying to figure their way as they go. These types of entities, such as GameStop, have created a really difficult situation for these people. They think they’re missing out if they don’t make a bet on them. They don’t really understand what they’re doing. I think small-time investors like that, unsophisticated investors, are going to be hurt.”

Galvin also argued that the situation threatens to “undermine” the financial market, calling the movement in GameStop’s share price “irrational.”

“It makes absolutely no sense,” he said. “It has no basis in reality. That is not what you want in a capital market.”

Idd... horde herten sleurt hyena onderuit zou geschikter zijn.
Wullie bin KOEL © Soneal
Why be difficult when, with a bit of effort, you could be impossible?
donderdag 28 januari 2021 @ 11:40:47 #15 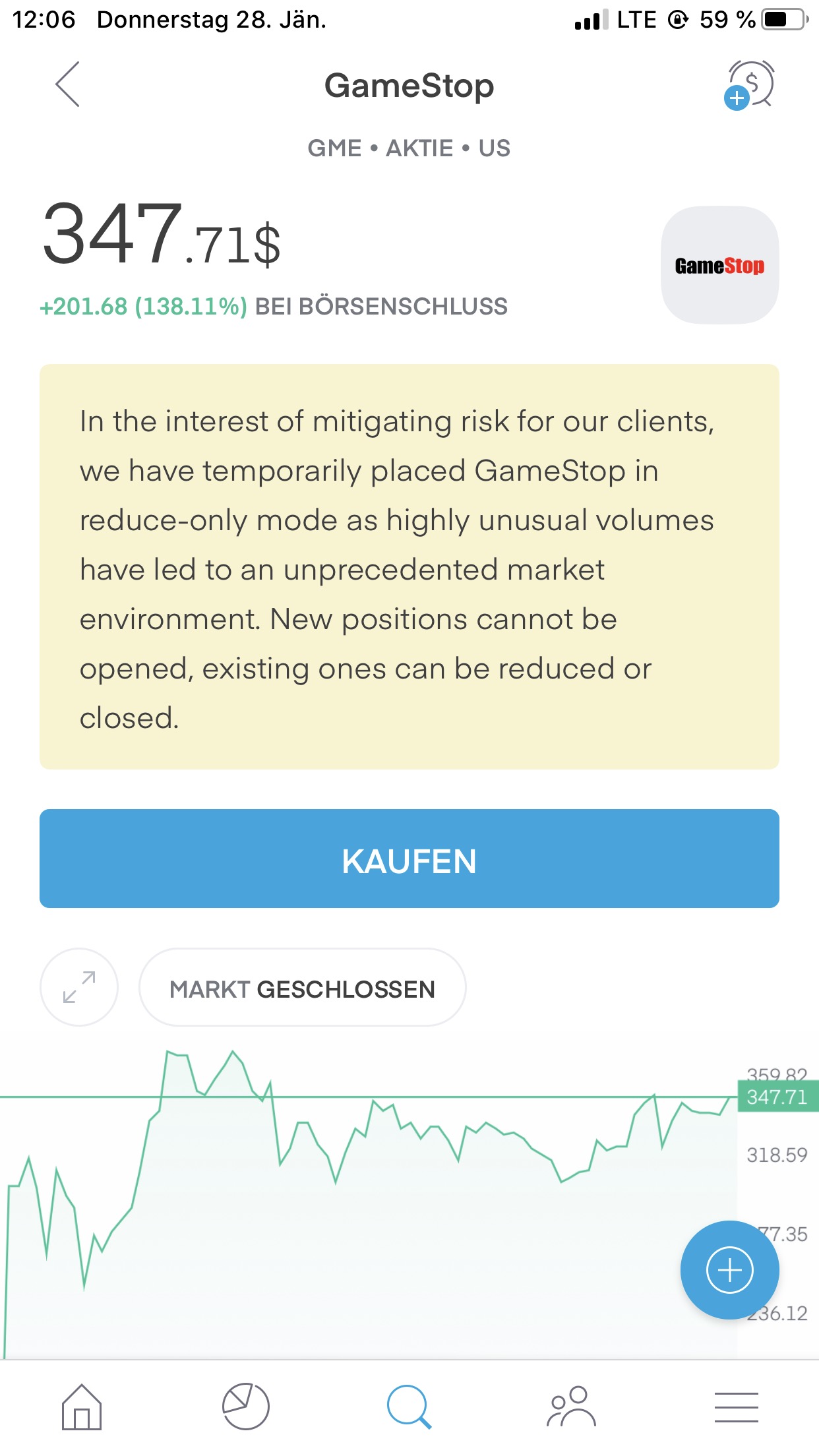 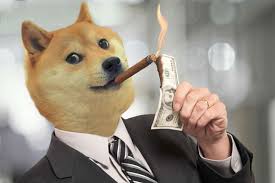