quote:
The Most Important Number for the West’s Hideous Fire Season
A little-noticed indicator was flashing red before any of the blazes began.

In other words, water responds to the sponginess—the thirstiness—of the atmosphere. And this summer, the atmosphere across the West had a lot of thirst. Climate scientists measure this trait using a statistic called the vapor-pressure deficit, or VPD.

The vapor-pressure deficit indexes two other measurements: the air temperature and the relative humidity. Both measurements affect the air’s sponginess. Hotter air is more likely to bump water into a gas state, while drier air can hold more water vapor overall. The vapor-pressure deficit measures the overlap. “It’s the difference between the amount of water vapor that’s in the air and the amount of water vapor that the air can possibly hold,” Williams said.

When the vapor-pressure deficit is high, it means the atmosphere has become an immense, six-mile-high sponge. The arid air will induce water to evaporate from wherever it’s hiding—the soil, the wooden boards of houses, the limbs and leaves of trees and underbrush. 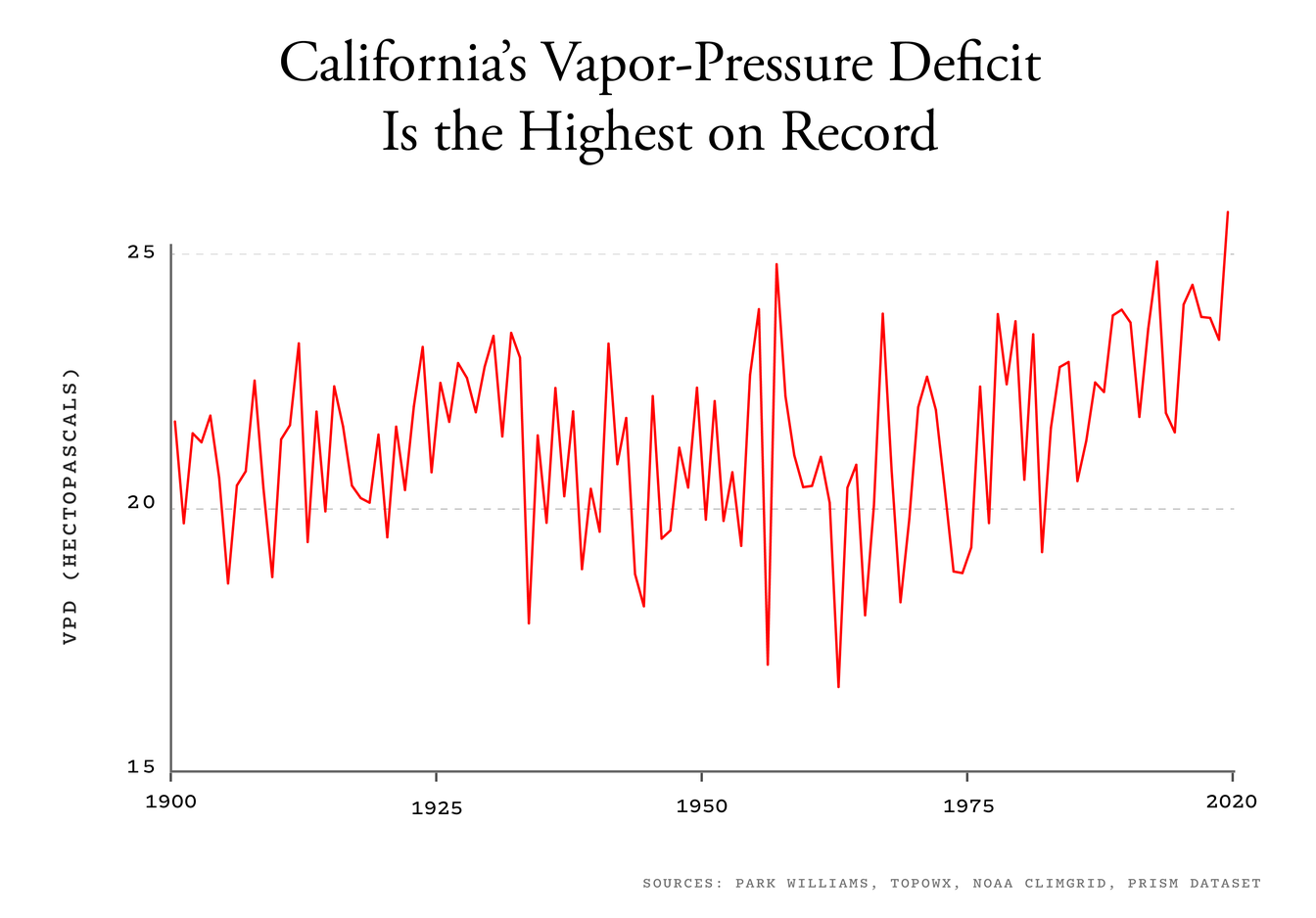 The vapor-pressure deficit in August in California, as calculated by Park Williams

That explains part of what’s been so dangerous about this month’s fires: They have grown explosively. Several have swelled to a size of 100,000 acres—that is, more than 150 square miles—in the first 12 hours of their existence, Swain told me. “That statistic is so astonishing that I’m having trouble putting it into words,” he said.

“[These fires] just poofed into existence—they were nothing and then they were megafires,” he said. The North Complex Fire, which has killed at least 15 people, “burned essentially 200,000 acres in a day—that alone would be one of the largest fires in California history, but it did that on the same day that eight fires made enormous runs.” And although the North Complex Fire was pushed by high winds, many other fires swelled to 50,000 or 100,000 acres in more stagnant weather. “In some ways, a 50,000-acre run in the forest with no wind at all is even more alarming.

The horror of this year may seem, in retrospect, like an outlier. But the onslaught of fires in recent years should teach us something about climate change and western wildfire, the researchers said: Thanks to VPD, every additional amount of warming leads to exponentially more fire than the year before it. This is because VPD measures the absolute saturation of the atmosphere, which increases even if the atmosphere stays just as humid.