MASSIVE PEDOPHILE NETWORK EXPOSED: WHAT DOES NETFLIX'S "CUTIES" HAVE TO DO WITH IT?
https://www.bitchute.com/video/WiNKpTVTPce4/
Lockdowns leading to more lockdowns is proof of the effectiveness of lockdowns
Trust the 'Science'.
maandag 26 oktober 2020 @ 21:08:57 #154

OHIO — Ohio Attorney General Dave Yost said 50 law enforcement agencies across the state led an operation that has resulted in the rescue of more than 100 human trafficking survivors and 177 arrests.

“The success of Operation Autumn Hope is measured not only in the number of arrests but in the lives that were rescued from this evil,” Yost said. “Every agency on this team looks for the day when no person is bought and sold in Ohio. Don’t buy sex in Ohio!”

The effort was carried out in various parts of the state and had four priorities: rescuing victims of human trafficking and referring them to social services, recovering missing and exploited children, catching those seeking to have sex with a minor and arresting male johns seeking to buy sex.

The sting was part of a multi-jurisdictional operation, which included U.S. Marshals, Dayton Police, the FBI and other law enforcement agencies across the state.

Across southern Ohio, 76 missing and exploited children cases were cleared, including 45 by physical recovery by the U.S. Marshal’s Service.

“My thanks to all personnel who have stepped up for this operation,” said Peter C. Tobin, U.S. Marshal for the Southern District of Ohio. “These are the same personnel who hunt down violent fugitives every day. I’m incredibly proud of them and pleased that they were able to apply those same skills to finding missing children. I know Operation Autumn Hope has made a difference in a lot of young lives.”

In Central Ohio alone, the sting resulted in 50 arrests being made in just three days, investigators said. Guns also were recovered.

Yost said human trafficking is not just limited to urban areas and said Ohio’s status as the “crossroads of America” plays a role as well.

“We have a lot of home-grown human trafficking too," Yost said. “It operates in the shadows.”

quote:
'You'll Bury Everyone Involved': Bobulinski Recorded Biden Operatives Begging Him To Stay Quiet, Set To Release Tues
Former Biden insider Tony Bobulinski allegedly has a recording of Biden family operatives begging him to stay quiet, or he will "bury" the reputations of everyone involved in Hunter's overseas dealings.

According to The Federalist's Sean Davis, Bobulinski will play the tape on Fox News' "Tucker Carlson Tonight" on Tuesday, when Carlson will devote his show 'entirely' to an interview with the Biden whistleblower.

quote:
Imagine if Donald Trump Jr. was smoking crack while getting footjobs from potentially underage family members, whose pornographic photos were found on his laptop.

https://www.zerohedge.com(...)gging-him-stay-quiet
Lockdowns leading to more lockdowns is proof of the effectiveness of lockdowns
Trust the 'Science'.
dinsdag 27 oktober 2020 @ 10:11:24 #156 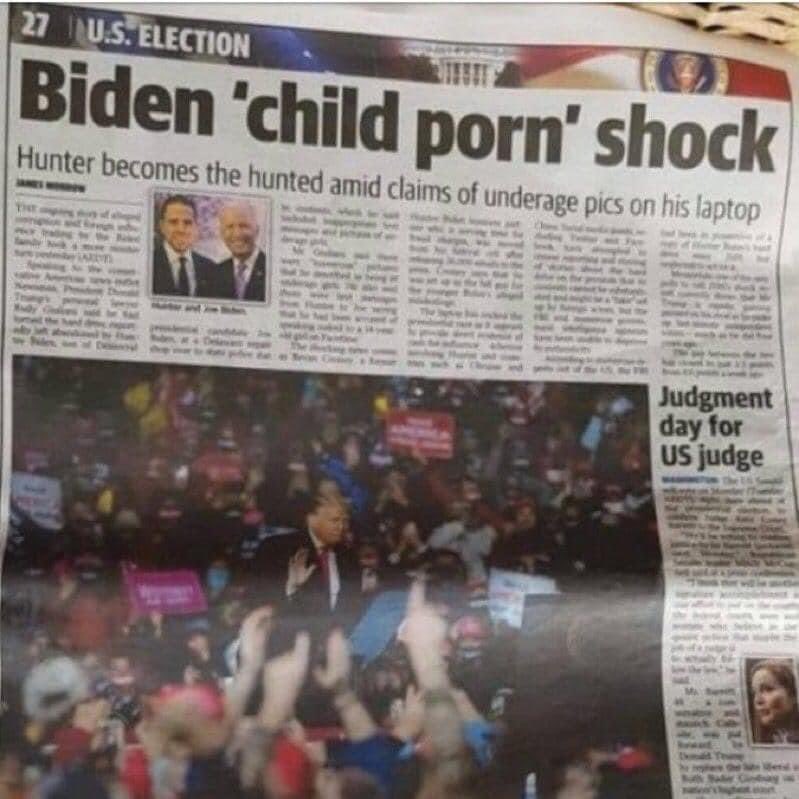 Hunter becomes the hunted.
Lockdowns leading to more lockdowns is proof of the effectiveness of lockdowns
Trust the 'Science'.
dinsdag 27 oktober 2020 @ 18:33:01 #172