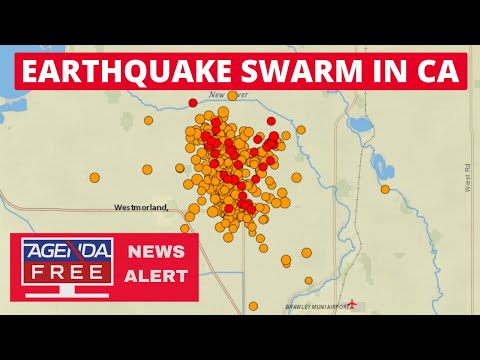 quote:
SEP. 30, 20205:24 PM UPDATED5:46 PM
A swarm of small earthquakes struck a region of Imperial County south of the Salton Sea on Wednesday.

The biggest of the temblors measured magnitude 4.9 and struck after 5 p.m. near the town of Westmoreland.

There were other, smaller quakes, including at least 10 that measured greater than magnitude 3.0.

According to the U.S. Geological Survey, the quakes were largely felt in relatively remote regions of Imperial and Riverside counties.

ADVERTISEMENT
Seismologist Lucy Jones said on Twitter that the epicenter was probably "too far from the San Andreas [fault] to change the probability of a quake on it." The San Andreas is capable of producing a catastrophic quake known as the Big One.

She noted that quake swarms are relatively common in the Imperial County area and that Westmoreland saw a 5.8 quake in 1981

quote:
3 Scenarios
The following three scenarios describe the possibilities of what could happen from September 30 to October 6, according to the USGS forecast released on September 30.

Only one of these scenarios will occur within the next week, USGS said.

These scenarios include the possibility of earthquakes on and off the Imperial and San Andreas Faults.

1. Scenario 1 (most likely): Earthquakes continue, possibly including earthquakes up to magnitude 5.4.

The most likely scenario is that the rate of earthquakes in the swarm will decrease over the next 7 days. Some additional moderately sized earthquakes (M4.5 to 5.4) may occur, which could cause localized damage, particularly in weak structures. Smaller magnitude earthquakes (M3.0+) may be felt by people close to the epicenters.

A less likely scenario is a somewhat larger earthquake could occur (up to M6.9). Earthquakes of this size could cause damage around the area close to the earthquakes that have already occurred and would be followed by aftershocks that would increase the number of smaller earthquakes per day. This scenario occurred in a previous swarm in the area – in 1981, when a swarm in this region included a magnitude 5.8 earthquake.

3. Scenario 3 (least likely): A much larger earthquake (magnitude 7 or higher) could occur within the next 7 days.

A much less likely scenario, compared with the previous two scenarios, is that the ongoing swarm could trigger an earthquake significantly larger than the M4.9 that occurred on September 30 (i.e., M7.0 and above). While this is a very small probability, if such an earthquake were to occur, it would have serious impacts on communities nearby and would be followed by aftershocks that would increase the number of smaller earthquakes per day.