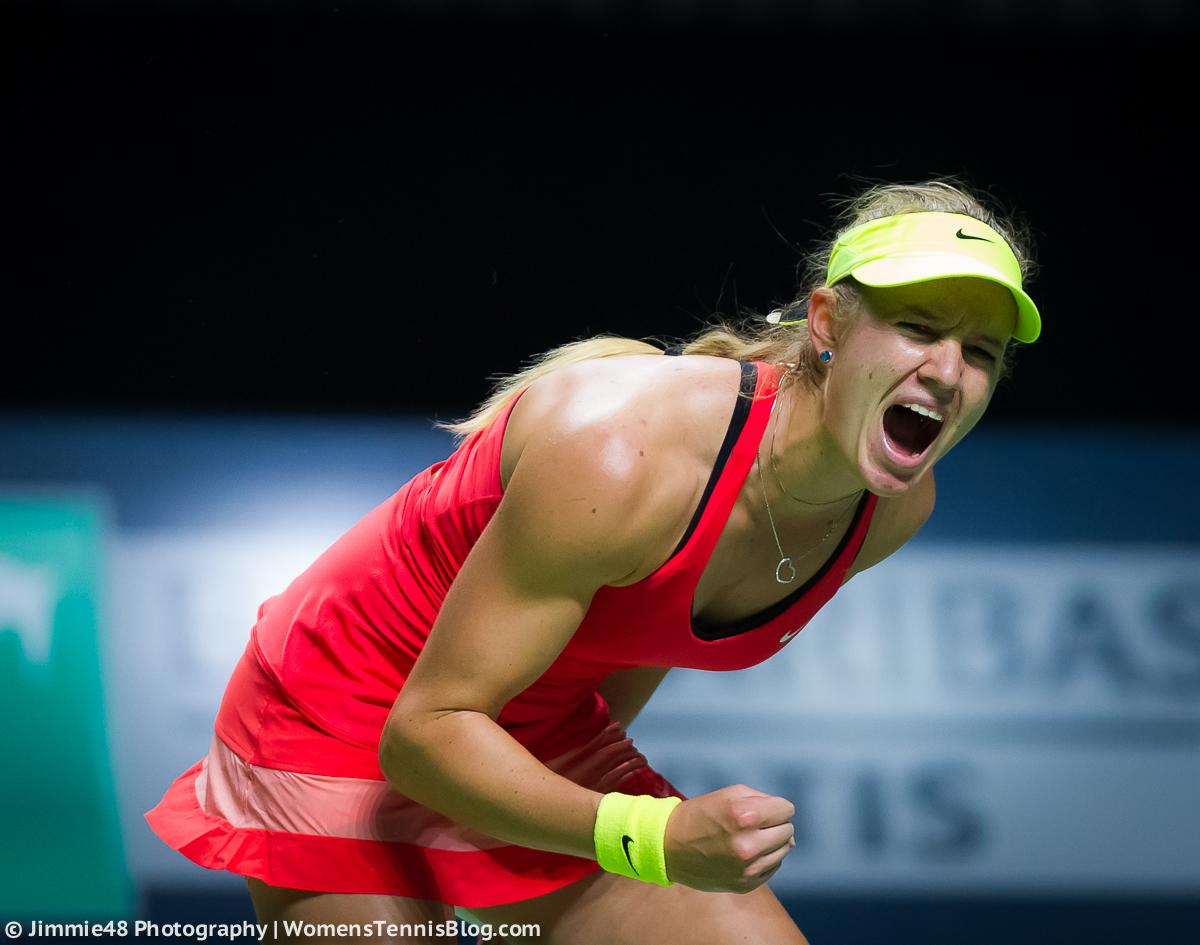 quote:
ANTWERP, Belgium - On Wednesday afternoon, qualifier Indy de Vroome caused a minor upset at the BNP Paribas Fortis Diamond Games when she ousted Tsvetana Pironkova in three sets. It was her first WTA main draw win and set up a second round meeting with former Australian Open finalist and No.6 seed Dominika Cibulkova.

Although her run came to an end at the hands of Cibulkova, de Vroome has done her reputation - and ranking - no harm with her showing in Antwerp.

Having honed her game back home in the Netherlands, de Vroome has recently hopped over the border to start working at former World No.1 Kim Clijsters' academy. This coaching change was just one of the items on the agenda as wtatennis.com sat down with the 18-year-old following her meeting with Cibulkova.

How did you get into tennis?
IDV: I had two older brothers who both played tennis at a really young age. I always wanted to join them, so I started to play as well when I was about four or five. My mum was practicing with my brothers, and I wanted to be part of that.

Do your brothers still play tennis?
IDV: Not at a professional level. They both study now. One is at college in America, at USC, and the other is in his last year of studying osteopathics.

What's your current coaching situation?
IDV: Right now, I'm at the Kim Clijsters Academy. I've only been there for a couple of weeks, but so far it's been good. I had a couple of different coaches before that, and from each of them I learned a lot.

Have you always trained in Europe?
IDV: Yes. I spent some time in the IMG academy, in Florida, before, but that was only for a short period.

How would you describe your playing style?
IDV: I would describe my style as aggressive. I like to really build up the point, then, when I have the chance, to open up the court and step in. My strengths are my serve and that I always try to come forward.

Did you have a tennis idol when you were growing up?
IDV: I had a few different ones, but definitely one was Roger Federer - he was always a really big idol for me. On the women's side, it would be Serena - I think she's an unbelievable tennis player - and Sharapova - she's another one to really look up to. I'm also wearing the Sharapova Nike line - so that's another reason I like her!

What's the best memory of your tennis career to date?
IDV: I have so many good memories from tennis. But, for me, every day is just great and I try and go out and improve myself. That's something I love in tennis - that you can always keep improving and trying to be better. The best memories are obviously in the tournaments I won. There are many different memories, though, and hopefully the best are to come.

Who is the best player you've faced?
IDV: I don't know, that's a tough question - I've played a lot of good players. Simona Halep and Cibulkova are the highest-ranked players I've played, and they were both very tough and very good. It was nice to play them and have that experience, so I really liked that.

What are your goals in tennis?
IDV: To be the best I can. I hope to win a Grand Slam or be No.1 in the world. Those are like the major goals!

And your favorite tournament?
IDV: Wimbledon.

Do you like to explore the cities you visit on tour?
IDV: Unfortunately, usually I don't have time. But I like to read about places - particularly history books.

How far did you go in your education?
IDV: I finished high school and now I'm doing a little bit of self-studying in Spanish. I think it could be useful, because it's a world language and you use it on tour a lot. I could do more, but it's going okay!

What do you do in your free time away from tennis?
IDV: Read books, spend time with my family, watch movies, have nice meals.

Do you have a favorite book or movie?
IDV: I don't know, there are so many. Mostly Dutch books. I read Nadal's book - that was good! As for movies, I really like The Shawshank Redemption. I like sports movies, as well.

If you had to describe yourself in one word, what would it be?
IDV: Can I use two? Hard-working.

If you could meet one person in the world, who would it be?
IDV: Roger Federer!

If you weren't a tennis player what would you be doing now?
IDV: That's a very tough one. There's a lot of stuff that I like, but I wouldn't know exactly what I'd like to do. I was always very interested in history at high school - which a lot of people find strange - so I could have done something involving that. Or perhaps another sport.

quote:
If you had to describe yourself in one word, what would it be?
IDV: Can I use two? Hard-working.