quote:
Florida man rescues puppy from jaws of alligator without dropping cigar
A Florida retiree dived into the water and wrestled the reptile to free his puppy, Gunner

A man in Florida rescued his puppy from the jaws of an alligator, diving under the water and wrestling the reptile all without dropping the cigar in his mouth.

Richard Wilbanks, 74, was walking his Cavalier King Charles spaniel, Gunner, around the pond near his retirement home in Estero, Florida, when the alligator raced up from the water and grabbed the dog, Wilbanks told CNN.

"It came out of the water like a missile," he said. "I never thought an alligator could be that fast. It was so quick."

Cameras set up by the Florida Wildlife Federation and the fSTOP Foundation captured the encounter, which shows Wilbanks in the pond, his head submerged as he tries to grab a hold of the alligator. He then emerges holding the reptile, which still has the dog in its jaws. In Wilbank's jaws is a cigar - which he never drops.

'He had green eyes': Florida man will paint alligator that attacked him
Read more
Wilbanks moves to the edge of the pond while trying to pry the dog free. Eventually he succeeds, and Gunner runs away while Wilbanks tries to extract his own hands from the creature's mouth.

Gunner has since seen a vet, and while he suffered a small puncture wound to his stomach, he is otherwise fine, CNN reported, while Wilbanks said that his hands were "chewed up".

He doesn't want the alligator removed, he said. "They're part of nature and part of our lives."

But he will be keeping Gunner on a leash and at least 3 metres (10 feet) from the pond from now on. 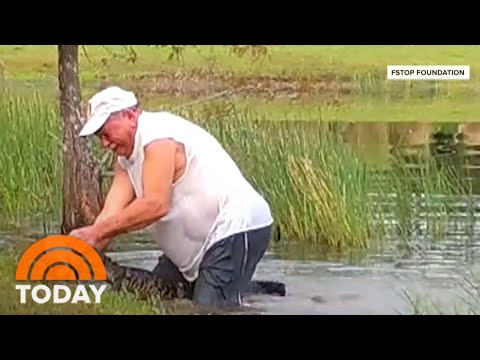