ATP No. 1 presented by FedEx
(determined by FedEx ATP Rankings)
Novak Djokovic: The Serbian finished World No. 1 for a record-equalling sixth time in the past 10 years (also 2011-12, 2014-15 and 2018) after a stellar season in which he picked up four tour-level titles. Djokovic won his first 26 matches of the season, claiming a historic eighth Australian Open crown and lifting trophies at the Dubai Duty Free Tennis Championships, the Western & Southern Open in New York and the Internazionali BNL d’Italia in Rome. He was also a runner-up at Roland Garros and reached the semi-finals at the Nitto ATP Finals. At 33 years, 6 months, 16 days, Djokovic set a new record as the oldest year-end No. 1 in the history of the FedEx ATP Rankings, overtaking Rafael Nadal’s 2019 record (33 years, 5 months, 23 days). Djokovic also drew level with his childhood hero, American Pete Sampras, who ended six straight years at the pinnacle of men’s professional tennis from 1993 through 1998.

ATP Doubles No. 1 presented by FedEx
(determined by FedEx ATP Rankings)
Mate Pavic & Bruno Soares: The Croatian/Brazilian duo of Pavic and Soares surged to the year-end No. 1 FedEx ATP Doubles Team Ranking after strong results in the second half of the season. While both players have previously reached the top of the doubles game, Pavic in 2018 with Oliver Marach and Soares in 2016 with Jamie Murray, it was their first year-end No. 1 finish as a team. Pavic, 27, and Soares, 38, teamed to capture their first Grand Slam trophy together in September at the US Open. They went on to reach two big finals in Paris at Roland Garros and the Rolex Paris Masters.

Comeback Player of the Year
(voted by ATP players)
Vasek Pospisil: Former World No. 25 Pospisil was sidelined for much of 2019 after undergoing back surgery to repair a herniated disk, and started the year ranked outside the Top 100. But the Canadian cut his FedEx ATP Ranking by more than half after a statement comeback season, jumping 89 spots to sit at No. 61. He made the biggest jump in the year-end Top 100 from 2019. Pospisil, 30, reached his first ATP Tour final since 2014 at the Open Sud de France in Montpellier, and backed it up with a run to the Sofia Open final – the second and third ATP Tour finals of his career. Pospisil also reached the fourth round of the US Open, defeating back-to-back Top 20 players – Roberto Bautista Agut (No. 11) and countryman Milos Raonic (No. 18) – along the way to his best Grand Slam result since his 2015 Wimbledon quarter-final. Kevin Anderson, Andrey Kuznetsov and Raonic were also nominated in this category.

Most Improved Player of the Year
(voted by ATP players)
Andrey Rublev: 23-year-old Rublev rose from No. 23 to a career high No. 8 in the FedEx ATP Rankings after a red-hot season saw him win five titles – more than anyone else on Tour. The Russian exploded onto the courts at the start of the year by winning back-to-back titles at the Adelaide International and the Qatar ExxonMobil Open in Doha, becoming the first player since Dominik Hrbaty in 2004 to start the year with titles in the first two weeks of the season. He continued to impress in the second half of the season reaching quarter-finals at the US Open and Roland Garros, and added three ATP 500 trophies to his cabinet with victories at the Hamburg European Open, St. Petersburg Open and Erste Bank Open (Vienna). Rublev capped it off with his debut appearance at the Nitto ATP Finals and finished with a 41-10 win-loss record on the year, equalling Novak Djokovic (41-5) with the most match wins on Tour in 2020. Ugo Humbert, Diego Schwartzman and Jannik Sinner were also nominated in this category.

Newcomer of the Year
(voted by ATP players)
Carlos Alcaraz: Spain’s Alcaraz finished 2019 at No. 491 in the FedEx ATP Rankings. In 2020, he moved 350 spots to close the season at No. 141 after reaching a career-high ranking of No. 136, winning a trio of ATP Challenger Tour titles to mark his rapid rise. The 17-year-old, who was the youngest of four teenagers in the year-end Top 200, claimed his first ATP main draw victory in emphatic fashion, outlasting No. 41 Albert Ramos-Vinolas in the first round of the Rio Open. Alcaraz made his Challenger breakthrough when he lifted the trophy in Trieste, but the best was yet to come as he arrived on home soil. The Spaniard lifted back-to-back Challenger trophies in Barcelona and Alicante – the latter sealed with his second Top 100 victory of the year in the final. As a result, Alcaraz added his name to an exclusive club of players who have won at least three Challenger titles before turning 18, joining Richard Gasquet, Novak Djokovic, Juan Martin del Potro and Felix Auger-Aliassime. Five other #NextGenATP stars – Sebastian Korda, Lorenzo Musetti, Jurij Rodionov, Emil Ruusuvuori and Thiago Seyboth Wild – were also nominated in this category.

Stefan Edberg Sportsmanship Award
(voted by ATP players)
Rafael Nadal: Fellow players chose World No. 2 Nadal as the winner of the Stefan Edberg Sportsmanship Award for a third straight year and fourth time overall, recognising the Spaniard for his fair play, professionalism and integrity on and off the court. Nadal also received this honour in 2010. John Millman, Diego Schwartzman and Dominic Thiem were also nominated in this category.

Arthur Ashe Humanitarian Award
(awarded by ATP)
Frances Tiafoe: Rising American star Tiafoe made a big impact off the court during a turbulent 2020 season, using his platform to the fullest during the ATP Tour’s five-month suspension. Tiafoe, who supports ThanksUSA and the USTA’s National Junior Tennis and Learning Network (NJTL), auctioned off signed memorabilia to Athletes for COVID-19 Relief, with the funds benefiting the Center for Disaster Philanthropy. Alongside girlfriend and fellow player Ayan Broomfield, Tiafoe also posted ‘Racquets Down, Hands Up’, an impactful video that united the Black tennis community in the wake of George Floyd’s killing, featuring cameos from Serena Williams, Naomi Osaka, James Blake, Gael Monfils and more.

Fans’ Favourite Award (Singles)
(voted by fans)
Roger Federer: The 39-year-old Swiss was selected by fans as Fans’ Favourite for a record 18th straight year, taking his record haul of ATP Awards to 39. Currently ranked World No. 5, Federer reached the 2020 Australian Open semi-finals in his first tournament of the season, but was sidelined in the subsequent months after undergoing right knee surgery.

Fans’ Favourite Award (Doubles)
(voted by fans)
Jamie Murray & Neal Skupski: The all-British duo won their first Fans’ Favourite award. Murray, 34, and Skupski, 31, teamed in 2019 and finished this season with their first title together at the Sofia Open. The pair also reached two finals at the Western & Southern Open in New York and Erste Bank Open in Vienna.

Coach of the Year
(voted by ATP coaches)
Fernando Vicente: Andrey Rublev’s coach guided the 23-year-old Russian to an ATP Tour-leading five titles from five final appearances and 41 match victories, as well as a career-high No. 8 in the FedEx ATP Rankings. “I would give him an ‘outstanding’ on the season,” Vicente told ATPTour.com. The former Spanish player helped lead Rublev to his first ATP 500 titles at the Hamburg European Open, St. Petersburg Open and Erste Bank Open (Vienna), in addition to winning in Adelaide and Doha. Vicente was selected as the winner from a shortlist that included Gilles Cervara (Daniil Medvedev), Juan Ignacio Chela (Diego Schwartzman), Nicolas Massu (Dominic Thiem) and Riccardo Piatti (Jannik Sinner).

Tim Gullikson Career Coach Award
(voted by ATP coaches)
Bob Brett: The 67-year-old Australian, who formerly worked with Grand Slam champions such as Boris Becker, Goran Ivanisevic, Marin Cilic and Johan Kriek in a 46-year coaching career, was unanimously chosen as the second winner of this award. The recipient exemplifies excellence, leadership, respect, and a true love for the sport of tennis and the art of coaching. Named after the late Tim Gullikson, the award showcases someone who has inspired generations of young players and fellow coaches to grow the sport of tennis.

Ron Bookman Media Excellence Award
(awarded by ATP)
Kevin Mitchell: A sportswriter for The Guardian, Mitchell specializes in tennis and boxing. Born in Malawi and educated in Australia, Mitchell was named the UK’s Sports Journalist of the Year in 1999 and was formerly the chief sports writer at The Observer. He has also written for the London Daily News, the Sunday Times and Hayters, and authored numerous books, including boxer Frank Bruno's autobiography. 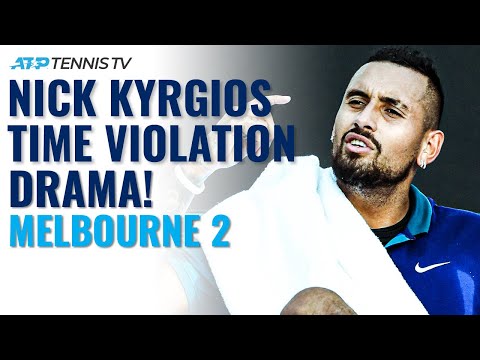