Beautiful picture of the partly frozen Daube River from Budapest, taken from twitter user budapestagent.
A cold spell that has now claimed nearly 500 lives will continue through the weekend for much of Europe before diminishing in the west next week.
The cold is spanning all the way from Moscow, Russia, to Spain. That is a distance of approximately 2,500 miles, or about the same distance from Los Angeles to New York City.
The cold will continue across much of the continent through the weekend, before the weather pattern turns more seasonable across western Europe, according to AccuWeather.com Meteorologist Eric Leister.
Western Russia, Belarus, Ukraine, Poland, the Czech Republic and Slovakia will remain cold next week; however, temperatures will not be quite as extreme as they have been over the past couple of weeks.
The cold has overloaded emergency services in Ukraine, where makeshift emergency shelters have been set up to help warm the 14,000 homeless residents of Kiev, the country's capital, according to CNN.
CNN also reports that parts of the Danube River have frozen over for the first time in 25 years. This has affected shipping routes across one of the most important rivers in the continent. The Danube is also a major source of drinking water, irrigation and tourism for the region.
Harsh cold will linger across eastern and southeastern Europe well into next week.
The cold will be "relentless" across the Balkan Peninsula and eastern Europe, according to Accuweather.com Expert Senior Meteorologist Bernie Rayno with another strong reinforcing cold shot moving into the region towards the end of next week.
At the same time, the jet stream will start to bulge to the north of northwestern Europe as the stormy weather slowly shifts east next week. Some moderation will occur as milder Atlantic air moves into Portugal, Spain, France, the U.K. and Amsterdam. Temperatures will return closer to normal in these areas. 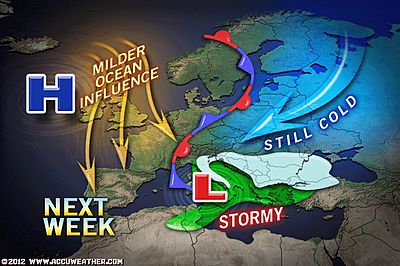